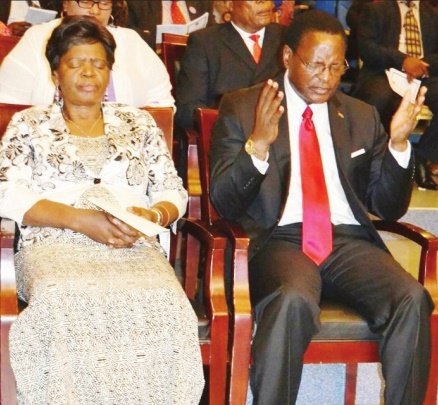 President Lazarus Chakwera has sacked Labour Minister Ken Kandodo over misuse of COVID-19 funds
Chakwera said in a televised address he had commissioned an audit into how 6.2 billion Malawian kwacha ($7.95 million) intended for the country’s coronavirus response programme had been spent, and that this had identified that funds had vanished, been misused and left idle.


“As I speak, over a dozen individuals suspected of committing the crimes exposed by this audit report have been arrested,” he said, adding this included an arrest at the office of the president and cabinet.
“There are no sacred cows,” Chakwera said. “If the finger of evidence points to you… you are going to prison.”
Kandodo had used 613,000 kwacha worth of COVID-19 funds for a foreign trip, Chakwera said, adding that even though he had since repaid the money his actions meant it was not available for its intended purpose when it was needed.
Chakwera promised to curb corruption when he took office in June last year, bringing his Malawi Congress Party out of opposition for the first time in 26 years.

As Malawians died in hospital for lack of oxygen & essential drugs, an audit on the use of Covid-19 relief funds shows that K928,000 ($1200) of the was used to buy tomatoes and ($1500) to pay allowances to a Minister who accompanied President Chakwera on a visit to South Africa https://t.co/nJmONP8dHS


He said there would be more arrests related to the audit, that civil servants would be made to repay stolen funds and that he would commission further audits into coronavirus-related spending and the use of funds in other areas like infrastructure.

Following an audit that revealed massive plunder of COVID-19 relief funds, Malawi President Chakwera has fired a cabinet minister who used Covid funds to pay allowances for a trip to South Africa.

Further, Chakwera has prayed for God's curse on anyone who stole COVID-19 money

Meanwhile, Malawi’s former president, Peter Mutharika, has accused the government of politically persecuting him
Mutharika, who lost to President Lazarus Chakwera during last year’s elections, faces legal action for administrative blunders committed when he was in office.


The latest is the case in which he is expected to pay about $87,000 in legal fees by wrongly forcing Chief Justice Andrew Nyirenda and Justice of Appeal Edward Twea on leave during his administration.

And in August, Malawi’s Anti-Corruption Bureau froze bank accounts of Mutharika and his wife, Gertrude, as part of investigations into his role in a scandal in which bags of cement worth about $6.6 million entered the country without being taxed.


Various efforts by Mutharika’s lawyers to have his bank accounts unfrozen have proven unsuccessful.

During a televised news conference at his residence in Mangochi district Saturday , he said freezing of his accounts is persecution of the highest form.