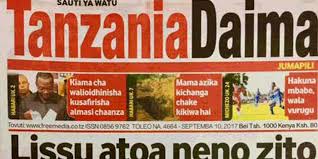 
Later, the Information Services department released a statement indicating that the tabloid was banned for publishing several stories with false information.
The stories include one published on its Sunday edition on the number of Tanzanians on anti-retroviral drugs. The headline of the article stated that 67 per cent of Tanzanians are on ARVs.

The newspaper acting Editor Martin Malera told The Citizen in a telephone interview that the newspaper has received official communication from the government.
Tanzania Daima becomes the fourth local newspaper to be banned from publication this year. Others are Mawio, Mwanahalisi and Raia Mwema.
…The Citizen

READ: Struggling Observer Newspaper to come out weekly as copy sales drop to 2,500