Home Politics Magufuli: A transformative leader whose rich legacy of success within a very... 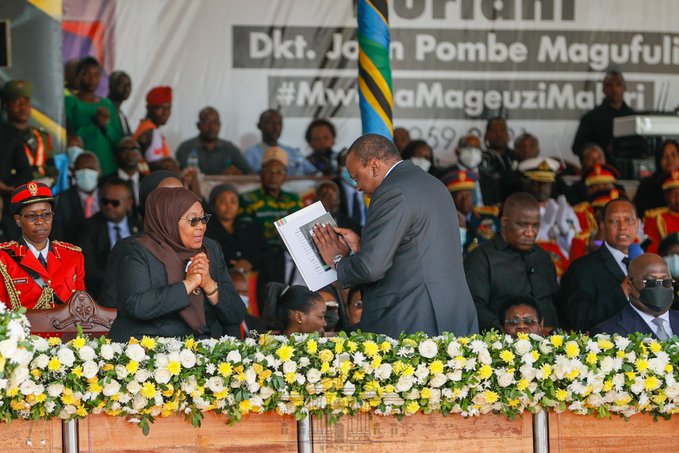 
“We mourn the loss of our friend, our brother, a hardworker, the Honorable John Pombe Magufuli. The President who was respected not only here in Tanzania but also in the entire East Africa, the whole of Africa and the entire world.
“He showed us that, as Africans we have the potential to liberate ourselves from dependence on foreigners. That we have potential as Africans to manage our economies and ensure that our people get justice,” he said.
The President, who is also the current Chairperson of the East African Community, said the late Dr Magufuli was a close ally with whom he spoke regularly, exchanging ideas on the relationship between Kenya and Tanzania, and the progress of the regional bloc.
He wished President Samia Suluhu success as she takes over the leadership of Tanzania, assured her of Kenya’s and the regions backing, and rallied Tanzanians to fully support their new leader.
“My sister Samia, and now my colleague President, you’ve been shown the way by our brother, the late Magufuli. You have the mandate, now go forth and serve the people.
“The people of Tanzania are behind you. Ours is to urge you to continue with the unity you have, work together and support your new President so that she completes the work started by our departed brother,” President Kenyatta told his Tanzanian counterpart.

In her address, the new Tanzanian President Samia Suluhu Hassan said the late Dr Magufuli was loved by many in Tanzania and the region, and regretted the passing away of the former Head of State.
“It is difficult to reconcile with the fact that Dr Magufuli is nolonger with us,” President Suluhu said, adding that the late leader was her mentor who helped lift the political profile of Tanzanian women.
“Forever, I will thank him (the late Dr Magufuli) for my success and the success of the women of Tanzania. Through him, Tanzania got its first woman Vice President who is now the first Woman President,” she said.
Beneath his no-nonsense approach to the management of public affairs, President Samia said Dr Magufuli was a loving fatherly figure with a playful streak that was only known to those that worked closely with him.
“To many Dr Magufuli was known as a no-nonsense person but for those of us that worked with him, he had a jolly side. He loved to see results and expected nothing but results. He had no time for hatred and sideshows,” President Suluhu recalled.
She assured Tanzanians and the region that she had what it takes to step into the shoes of Dr Magufuli, who was nicknamed ‘bulldozer’, and lead the East African country into a future of prosperity.
“For those in doubt, this woman will be an effective President of the United Republic of Tanzania. Whoever is standing here is the President. I want to repeat that whoever is standing here, is the President of Tanzania whose gender is female,” President Suluhu affirmed.


President Suluhu assured Mrs Janeth Magufuli, the widow of the former President, that her administration will continue looking after her and the family of the departed leader.
In their speeches, the visiting Heads of State eulogised Dr Magufuli as a brave, progressive and firm leader who served with great dedication.
President Felix Tshisekedi of DR Congo who is also the current Chairperson of the African Union described the late former President as a “nationalist and a great defender of the economic freedom of Africa”.


The Congolese leader said Dr Magufuli will forever be remembered for his relentless fight against corruption, and assured Tanzania’s new President Samia Suluhu of the Africa Union’s support as she steers her country forward.
South Africa’s Cyril Ramaphosa mourned the late Dr Magufuli as a forthright and bold leader who advocated for the adoption of Kiswahili language in African countries.