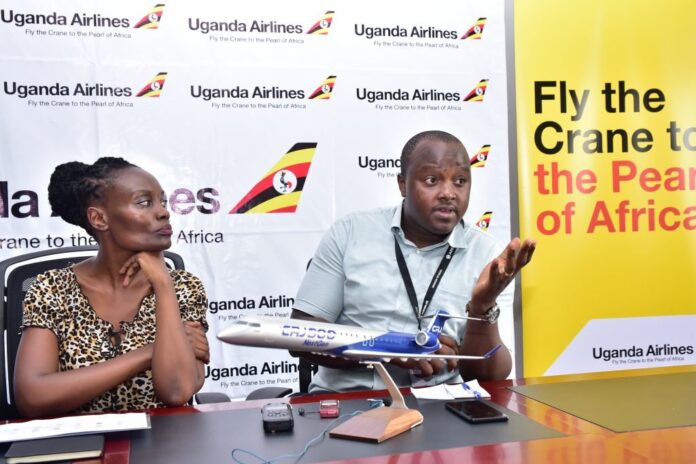 Members of Parliament on Tuesday tasked Uganda Airline officials to explain why the Airlines which is making loses to the tune of UGX 160bn a year is paying managers and directors exorbitantly with the CEO earning Ugx. 87M.
The sub-committee on Commissions, Statutory Authorities and State Enterprises (COSASE) commenced an investigation into the operations of Uganda Airlines following a red flag raised by auditor general John Muwanga in his report for FY 2020/2021.
According to the auditor general’s report, during the period under review, the airlines budgeted to incur ugx. 22.329 billion on salaries but, a review of the financial statements and payrolls for the same period indicated that ugx. 27.428 billion was incurred in respect of salaries and staff expenses, implying an excess expenditure ugx 4.919 billion.
Notably, the auditor general report pointed out that without an approved staff structure, the recruitment of the 107 staff of the airlines during the financial year under review is rendered irregular, and affects proper planning and budgeting for staff costs.
The auditor general revealed that the airlines made losses for the FY 2019/2020 and 2020/2021 amounting to ugx 102.442 and ugx 164.573 billion respectively. The current carrier began flying in August 2019, and it is a revival of the older Uganda Airlines which operated from 1977 until 2001.

The committee also questioned why some Pilots get UGX. 60m and others earns UGX. 50 million. Some Cabin Crew members earn four million Uganda shillings, while others earn less. The CEO Uganda Airlines said that the Airbus has a different pay structure from that of CRJ Bombardier. Captain Lukman Ndusa, a pilot with Uganda Airlines said pilots are paid according to the standards of most airlines worldwide. “We had to pick pilots from Rwanda, and Vietnam and some of them were Ugandans and were earning $13,000 monthly but we negotiated with them and they are currently earning $10,000,” he said.
CEO Uganda Airlines says that they are currently reviewing these salaries.
The COCASE chair tasked Uganda Airlines officials to come up with a staff structure within one month. He says this is how the Airlines will know who is needed and who is not. The Airlines had asked for end of year to develop one.
Joel also has quizzed the CEO Jennifer Bamuturaki on how she got appointed as Aide to the acting CEO and yet she had no appointment letter and was not being paid a salary. The committee also questioned how she rose from Aide to CEO.

Jennifer Bamuturaki, told the committee that she was not among the 40 Ugandans who applied for the job because “on the day I was going to apply, that is when I was appointed, ”

COSASE Chairperson Joel Ssenyonyi during today’s meeting said her appointment was unfair and in breach of the law.

“Like you said, 40 people expressed interest but then your arms were twisted and you decided to drop that process and go for an individual. What if there was better quality out there? As your role you have to make sure you hire qualified and competent people for the airline to be efficacious. You are not doing that as far as I am concerned but hand picking somebody and I don’t care by the way who arm twisted you,” he said.

In response, Herbert Kamuntu, a Uganda Airlines Board Member said they as a board had no option, having received instructions from the president.

Herbert Kamuntu facing off with Ssenyonyi He went on to ask Hon Ssenyonyi what he would have done “if you were in my shoes.”

Mr Samson Rwahwire, another board member also denied any wrongdoing.

“I would like to say that we didn’t flout any rules. A long time ago I worked for a European Country Aerospace. I did all the interviews and they, were three of them but mid-way it was cancelled. So it is very possible to start a process and mid-way it is aborted,” Rwahwiire said.

read: Fraud, insider dealing at Uganda Development Bank: 900m disappears just like that; could this be a tip of the iceberg?
Samson Rwahwire responding to MPs

“What I am trying to say is that we as a board, we made a decision to nurture this baby and when we put out this advert we were doing it in the interest of the country…She (Bamuturaki) has been acting CEO and we have seen positive strides during that time when she was acting CEO. I am speaking from experience as an aerospace engineer who has worked on aeroplanes.”

MPs also turned the heat on how Mrs Bamuturaki shot through the ranks from working as the CEO’s aide, to spokesperson, to Acting CEO and later CEO,

Asked how she came to serve as an aide to the former CEO Cornwell Muleya, Bamuturaki said this too came as a directive from the president.

“I was appointed by the President to support the acting CEO at the time. I don’t have the copy here of the directive. It is not an appointment letter but a directive to the Ministry of works and Transport,” she disclosed.

“I was called by the Permanent Secretary of the Ministry of Works and Transport (Waiswa Bageya) and he had been given a letter on few things that the President was communicating.”

The committee chair Hon Ssenyonyi said they will summon the MOWT PS Bageya Waiswa to iron out these issues.

“Herbert Kamuntu, a board member who represented the board chairperson of the airline revealed that the airlines initially contracted a recruitment firm, PwC to hire a substantive CEO, and received 40 applications from different candidates, adding that they abandoned the recruitment process following a directive by the president which led to Bamuturaki’s subsequent appointment.
He said that the fact that they halted the recruitment exercise was an unfortunate situation.“We hired a consultancy firm to put out an advert which they did, and while we were still going on with that process, we were told that this might be a quicker way to confirm the acting CEO,” said Kamuntu.
Kamuntu added that although the process was halted, they still need to pay PwC ugx. 95 million and they are now engaging with the firm to ensure that they manage the recruitment of several other senior officials soon to be recruited.
This is a serious institution handling billions of Shillings so everything has got to be clear,” Ssenyonyi said.