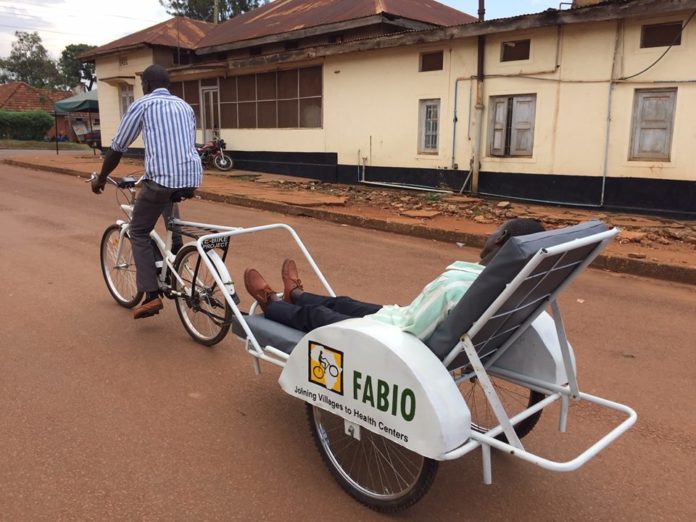 First African Bicycle Information Organization (FABIO), a Non-government Organization based in Jinja, eastern Uganda has launched the bicycle ambulance to easy transport of vulnerable groups to health centers.
The project targets pregnant women, children, elderly and unconscious people who are most affected by the lack of access to healthcare and sometimes die on the way to the hospital


The project also aims to reduce poverty and promote sustainable/environmentally friendly means of transport.
FABIO says the bicycle ambulances will operate for the health centres in Kyomiya, Ivunamba, Lukolo, Budondo and Kibibi, in Budondo Sub-County in Eastern Uganda.
For this particular project, FABIO received donations of private donors in Germany. Main sponsor of this project is the Embassy of the Federal Republic of Germany in Kampala.
FABIO started in 1997 and is registered with the National NGO registration board.

In 2015 FABIO founded the “FABIO BICYCLE CENTER” in order to increase sustainability of the NGO. FABIO BICYCLE CENTER is a workshop and bicycle retail store located in Walukuba.
The main task of the FABIO BC is to operate all bicycle related projects such as “Cycle to School”, “Bicycle Ambulances”, the Bicycle Tours and Rentals and offer Repair Service.


As a social business, FABIO says bicycle project’s target is to reduce poverty in Uganda by creating jobs and training the youth, increasing accessibility of health care services by increasing mobility of both individuals and health care workers, better access to markets and education beside others.