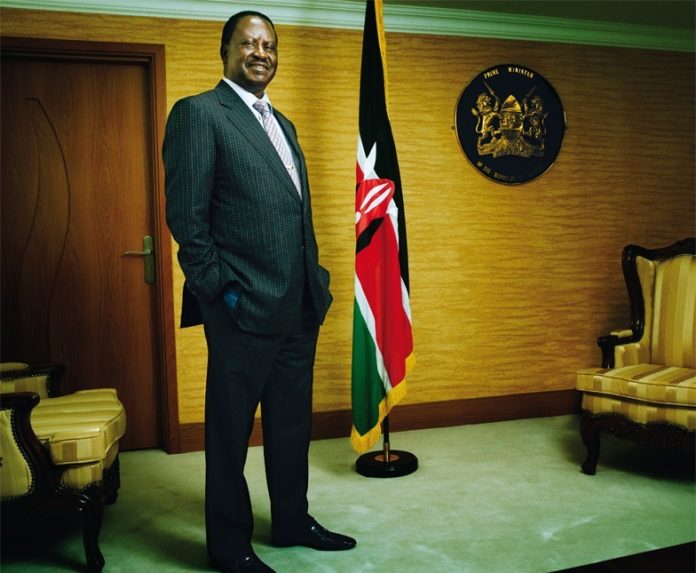 
Opposition leader Raila Odinga on Sunday announced that NASA will do a parallel tally and release its results after the August polls.
Raila said there was no room for the Jubilee Party to rig elections like they did in 2013 general election.
The 2013 election, in which President Uhuru Kenyatta emerged the winner, was marred by technical issues that delayed results.
The electronic voter transmission system set up and managed by the IEBC crashed early on election day. Claims emerged of sabotage as a way of rigging the election.

‘ ‘We have analysed and we know that you have registered and taken enough votes. In 2013 I won the elections, Governor Evans Kidero defeated Ferdinand Waititu. This time we will also win’’ Raila said.
Speaking when he addressed youths at the Joseph Kang’ethe Grounds in Kibra, Raila said the opposition had the numbers to remove Jubilee out of power adding “as long as all the votes will be counted correctly.”
” In every polling station, we will have a committee of 50 people. That day is called “Adopt a polling station” people will get out and adopt the polling station.’’ He said.
The committee selected for every polling station will act as party agents and voter marshals who will be tasked with announcing genuine results against that of IEBC.
“IEBC will announce their results … and we as Nasa will announce ours from our tallying centre for comparison.” We will not accept fake results,” Raila said.

“The constituency returning officers will announce Presidential election results at the constituency and transmit the same nationally.”
Raila said the coalition will also have their own register to check who had not yet voted and why.
” On the voting day we will have a register of each county to see the registered members, at 10am the members of the committee will check and see who has not yet voted and why’’ he said.
” Even if you are sick, the youths will bring you from where you are to come vote and take you back to rest. We want 100 per cent turnout’’ he said.


Last week, NASA said it will set up a parallel tallying centre for the August 8 poll results. It said the centre will stop the Jubilee administration from rigging the elections.
“This time, we’ll have our tallying centre,” Wiper leader Kalonzo Musyoka said.
ANC leader Musalia Mudavadi said, “As things stand, we know the electoral agency [IEBC] is creating the ground for a constitutional crisis. We also know Jubilee is working closely with “them”(Jubilee) so Kenyans vote manually.”
The move to have an alternative tallying centre has been rejected by the government and NASA told to respect the constitution.
State House spokesman Manoah Esipisu said the Independent Electoral Boundaries Commission is the only body mandated by the Constitution to run the elections.
Source: The Star