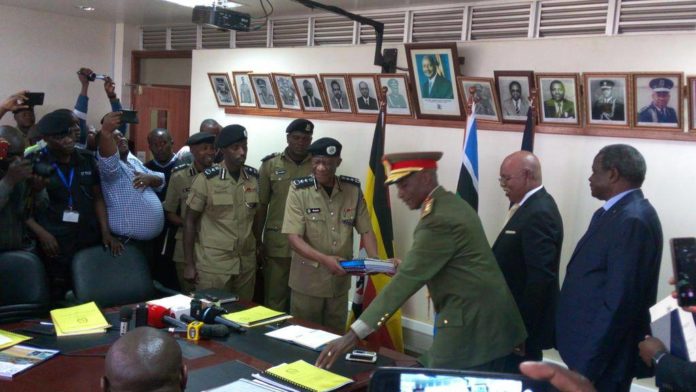 General Kale Kayihura on Thursday handed over office to his successor, Martin Okoth-Ochola.
In his speech at Naguru Police headquarters, the Jovial Kayihura said he was very excited for he handed over to the person he believes in, having worked with him in the force for a long time.


“In spite of the recent bad image, I am handing over a police force that is in better shape than the one I found. The force is now built on a solid foundation. And in spite of the setbacks, we are moving in the right direction,” he said
Adding that he took over command at a time of intense activity, there was political turbulence and opposition thought they could do anything without Police intervention, this was quite a challenge

Gen. Kayihura said that his contribution was both ideological and physical, giving an example of having transformed police from a normadic institution to its currnet beautiful headquarters in Naguru.
“I’m handing over physical structures that no body handed over to me. l may have imperfections in leadership but I have built professional capabilities.” He said.
On crime, Kayihura revealed that it is in his regime that crime drastically gone down despite the fact that it tried rise up last year.


“During my tenure, crime came down and you cannot rub it,” he said, He also apologized to those he might have annoyed in course of doing his work: “If there’s anybody I stepped on, am sorry, it was for the good of the country.”
He also honored President Museveni for trusting him and elevating him to the top, not just in the police, but in the army where he rose through the ranks to become a General. And above all for having approved him to serve as IGP for over 12 years.


Kayihura also apologized to anybody he could have stepped on during his tenure as the IGP.
“If there is any body I stepped on, please, I am sorry. I did not intend to, but it was for the good of the country,” he said.

read: Kayihura: Police rotten at the bottom ‘‘me am clean’’, vows to build Police afresh

Kayihura also said he will remain a loyal soldier of the Uganda People’s Defence Forces and a cadre in the struggle to liberate Uganda.

read: Kayihura to Museveni: Its us in govt who have failed you, promises total loyalty