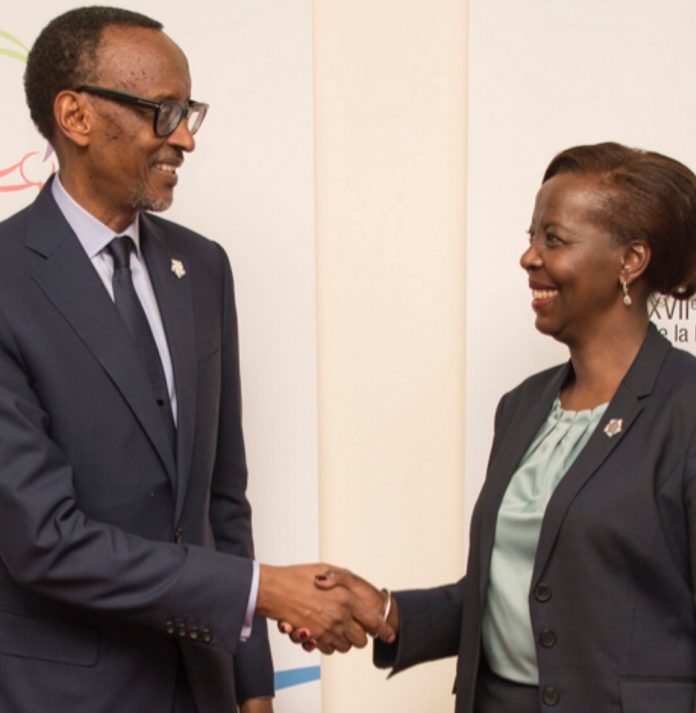 President Paul Kagame wants a woman to replace him when he finally retires.
“My wish is that one day, a woman takes up this position that you gave me,” Kagame told delegates during the 17th Umushyikirano on Thursday last week.


Umushyikirano is a forum for national dialogue where Rwandans gather to assess issues related to the state of the nation, the functioning of the decentralized structures, and national unity.
The discussions at this year’s Umushyikirano focused on continued efforts to sustain gains and foster inclusive growth, with an emphasis on economic growth and opportunities to improve competitiveness, as well as advance social development through strengthened and resilient communities.

Only two women have attempted run for presidency —Victoire Ingabire in 2010 and Diane Rwigara in 2017. They ended up in prison.
Rwanda ruling party, RPF, has notable women seen as potential successors of Rwanda’s strongman.
Experts say Rwanda has a pool of women leaders who can match the challenge.
Few countries have more women in politics than Rwanda. They make up 60 percent of the lawmakers, 50 percent of the cabinet and half of the supreme court judges


“There are many young and experienced women in political offices now. One name that comes up to me easily is Louise Mushikiwabo, who has vast experience in leadership and can take the challenge,” Ismail Buchanan, a professor of politics told The East African.
Rwanda introduced a quota in 2005 to bring more women into leadership positions. Thirty percent of civil servant positions were reserved for women and the quota system has paid off and beaten expectations. Altogether 61.3 percent of parliamentarians in Rwanda are women – that’s the highest percentage worldwide


Ms Mushikiwabo is the secretary-general of Organisation Internationale de la Francophonie and previously served as Rwanda’s Minister of Foreign Affairs and Co-operation of Rwanda from 2009 to 2018.
In Rwanda, the promotion of gender equality has also made it past politics and into the business sector. There’s a new crop of women in senior management: the CEOs of the government-owned airline RwandAir and the Bank of Kigali are women.


While attending the 2019 Doha Forum, he answered “most likely not” to a question on whether he will seek for a fourth term in 2024.
“I don’t know yet, but most likely no. When I say most likely, I mean I don’t want to lock myself into anything. I want to have some breathing space,” Kagame said.

“But I think that given the way things are or have been in the past, it depends on two things. But I think I have made up my mind where am concerned personally that it is not going to happen next time.”
The constitution allows him to run for another two five-year terms until 2034, and Mr Kagame says he still has a “lot of energy left to keep going” despite the economic transformation that he has overseen since the 1994 Genocide against the Tutsi.


“I can go on for several more years; I am not tired of doing what I am doing. I am working with my people and my country, and moving from the past of tremendous challenges but also making progress and creating hope for the people of Rwanda,” he said