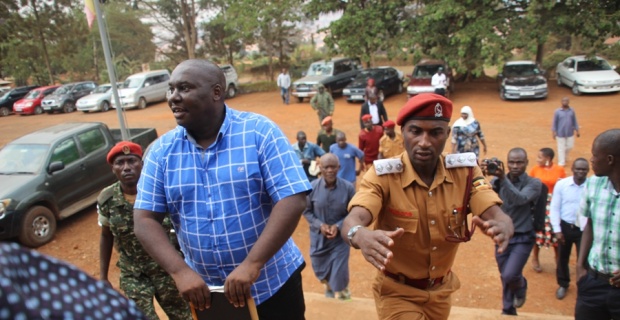 Kabaziguruka and 22 others are accused of trying to overthrow the elected goverment. The offences were allegedly committed between February and June 2016 in districts of Kampala,Wakiso and Luweero.

Judge Patricia Basaza based her ruling on Section 119 of the UPDF Act. The Act gives unlimited jurisdiction and powers to the Army Court to try civilians such as MP Kabaziguruka. In his application, the MP Kabaziguruka through his lawyer Ladisluus Rwakafuuzi stated he cannot be tried in an army court saying  he is a civilian who was never arrested with any army store or with an army officer.

He also questioned the impartiality of the Military Court to try a political offence considering that it members on the committee are appointed by the president against who the MP is said to have plotted.

Kabaziguruka is expected to re-appear before army court chaired by Lt Gen Andrew Gutti On September 26 , 2016.

In June 2016, President Museveni revealed that the Nakawa MP and FDC deputy electoral commission chairman tried but failed to kill him at his farm in Kisozi.

The president told political party leaders who met him at State House under the auspices of the Inter-party organization for dialogue that he has evidence that Kizza Besigye Kabaziguruka and Gen David Sejusa, the former coordinator of intelligence services, were planning something dangerous.

“He came to Kisozi to assassinate me. We cannot release Kabaziguruka when we have evidence of plans to commit crime; there should be accountability first before reconciliation; otherwise, it would breed impunity,” Museveni told the meeting.