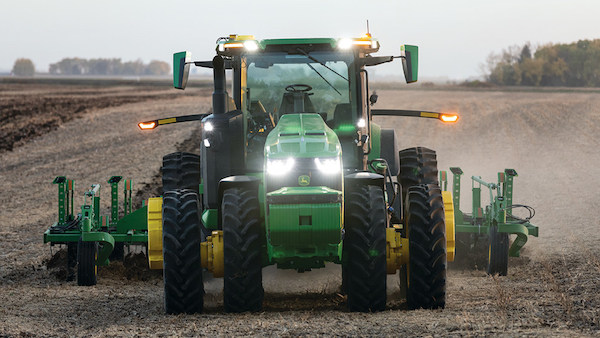 Four years ago, John Deere brought a whole new kind of machine to his 2,000-acre corn and soybean farm. That tractor could not only steer itself but also didn’t even need a farmer in the cab to operate it.
It turns out the 44,000-pound machine was John Deere’s first fully autonomous tractor, and Nimz was one of the first people in the world to try it out. His farm served as a testing ground that allowed John Deere‘s engineers to make continuous changes and improvements over the last few years.
On Tuesday, the rest of the world got to see the finished tractor


The emergence of fully autonomous farming equipment offers a twist to the century-old contest between man and machine. In farm country, where workers are in short supply and younger people are moving to cities, autonomy may be the only way to ensure enough food is grown to feed the world.
Riding solo
The new autonomous system won’t come cheap. A regular 8R tractor and the 2430 chisel plow will set a farmer back over $500,000.
At first, the new tractor system will only be able to till fields, which is the process of turning over the earth to return nutrients from recently harvested crops to the soil. Some farmers — pressed for time and lacking workers — skip that process, but that makes them more reliant on chemicals to help their crops grow. By automating the task of tillage, John Deere hopes to take away one responsibility from farmers’ long lists of duties.

John Deere installed multiple ways to stop and manually control the tractor, including through the throttle and normal brakes. The farmer also can grab the steering wheel to take over operation of the machine.
The tractor also has redundant systems on board to be sure the cameras and GPS signal are present. If those go offline, the tractor will stop.

Early on, John Deere’s autonomous technology had troubles with shadows. And leaves. And patches of dirt that were different colors than the others. All of them triggered the tractor to stop and send an alert about obstacles.
To help avoid false alerts of obstructions, John Deere’s autonomous 8R runs with the lights on all the time — an unusual sight in farm country.
Leaving the lights on all the time “makes the environment that we’re taking images of more consistent throughout the day and over time,” Hindman said. And the tractor actually performs better at night than during the day because there’s more contrast in the image data, he said.
John Deere has a US-based tele-support staff to examine obstacle alerts from the tractor. If the workers determine it’s something minor like leaves that blew across the path, they’ll let the machine resume operations without bothering the farmer.
If the tractor comes across something like a large rock, it will stop because the rock could get stuck in the tillage tool. The tractor sends a push notification to the farmer with an image of the obstacle. John Deere built in the ability for the tractor to route around those obstacles so the farmer doesn’t have to come to the field for every issue.

A key part of the autonomy process is the smartphone. John Deere designed the system to be controlled by iPhones and Android phones through its existing Operation Center app. For farmers with the new self-driving systems, an additional tab will show up that contains the autonomy features.
Inside the app, farmers swipe to start the vehicle and press a button to pause the operations. The app tells them how much fuel is left, how long the machine has been running and how long it’s been idle. They can see the obstacles under an “Events” section and bring up — and zoom in on — video from those 12 stereo cameras.
While growers can control a tractor from their phones and restart it after an obstacle is identified, they must be physically with the machine the first time they start it for the day.


read: Uganda seeks to feed the world through the new Fertilizer Policy

During the initial setup, the farmer has to map a boundary around the field and around barriers, similar to setting up a VR headset. That can be done by manually driving the tractor or using a John Deere Gator (a small, all-terrain utility vehicle) that’s connected to the company’s mapping technology.
Cnet