Home Politics It is possible for every Ugandan household to make it out of... 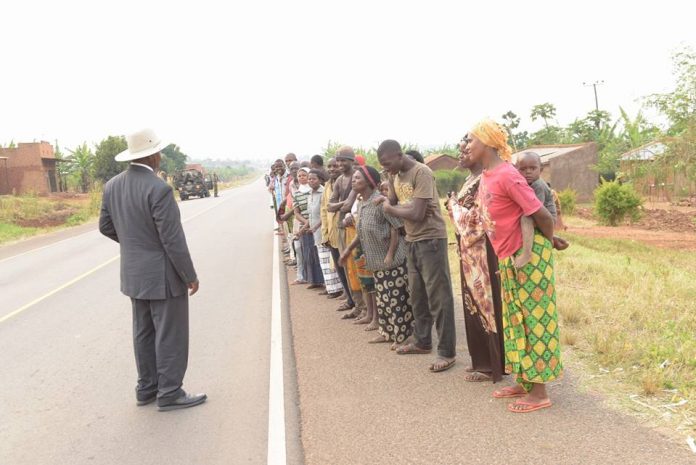 What an energetic campaign it has been so far! On Thursday May 9th, President Museveni launched a nationwide drive to spur a serious conversation with leaders and the masses on the question of creating wealth and kicking out household poverty.


The inaugural engagement was in Tooro sub-region, where he began by meeting the political and technical leaders from sub-counties upwards in Fort Portal town, then adddressed wanainchi in Kyenjojo before speaking to the entire sub-region through a radio address.

That is the standard format the President is using and here is why. The leaders are the pace-setters, it is important that they appreciate a message first because they are critical in ensuring there is buy-in from those they lead.


The rallies then help take the message to the wider public, the wanainchi, while the radio helps you speak to those that might not have made it to the rallies. It is a well-thought out strategy to ensure no one misses the message.

So, what is the message? It is possible for every Ugandan household to make it out of poverty, the President is preaching. There are four key sectors in which wealth can be created; commercial agriculture, industries, services and ICT.

In the meetings, the President goes at length to explain what opportunities each sector presents, but understandably, he dwells more on the subject of commercial agriculture.


This is because the bulk of Ugandans who are out of the money economy, 68 percent (according to the World Bank and the Uganda Bureau of Statistics), are trapped in subsistence agriculture. They simply till the earth to feed themselves but not make money.

Uganda is now a very peaceful and stable country. Therefore the old-time fear of being attacked in the garden or one’s produce being raided by marauding malcontents is no more. Infact, one can now even till their gardens at midnight with no fear of attacks except for the concern of social perceptions.


The infrastructure to link farmers to markets is in place. Uganda is linked from border (Busia/Malaba) to border (Bwera/Nimule/Katuna) by tarmac roads. Soon, borders like Lwakhaka in Manafwa and Suam in Bukwo will also have tarmac access. A farmer can harvest Irish potatoes in Kapchorwa today and have them in Nakasero Market in Kampala in less than 24 hours!

So, if the government is doing its part by creating a favourable environment, putting in place infrastructure and even going the extra mile to offer inputs through interventions like OWC, what then is the individual doing? That’s the question the President is putting to the leaders and the population.

To the leaders, like the President pointed out in Fort Portal, a population in poverty is a ticking bomb. “Having a big poor population is dangerous for you as leader, for the family and for Uganda and could result into a national crisis,” he warned.


Meticulously, the President has guided on what exact agricultural activities households in different sub-regions can engage in given the quantity of land they possess.

The ideal though is the four-acre model, split into an orchard, a poultry/piggery undertaking, a dairy project plus pasture and some food crops too.

In places like West Nile, the President has been candid to indicate tobacco should be cultivated by those with large chunks of land. In Bunyoro, he’s warned about citizens getting lost in the oil dream while in Tooro, he has pointed out how farming can be boosted by tourism.

The question of land fragmentation is another the President is ably tackling. Stop dividing land, especially as an inheritance, he has said. Families should collectively own land and simply share proceeds from the outputs. It is a very timely message, considering the fixed nature of land yet our population keeps growing.

The wealth creation gospel is resonating with the population if the reaction of the audiences is anything to go by. In Fort Portal, Stella Kemigabo Akiiki, a youth leader, was unequivocal in her praise of the President.


“I was in the leaders meeting, attended the rally and listened to him on radio. His message is very clear. It is our challenge now as leaders at the local level to guide our people. The President has done his part. Has has struck the right note,” she said.


To the people of Tooro, Bunyoro, Lango and West Nile, where the President has visited, all we can say is thank you. The reception has been massive, the audiences very receptive. There are more 17 sub-regions to visit. The bottom line though is, the fight to eradicate poverty is not just for the President, it is for all Ugandans.