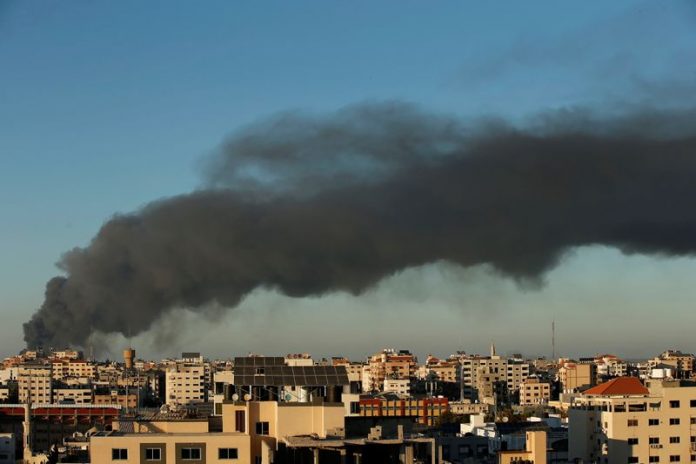 Rescue workers in Gaza are continuing to search through the rubble of destroyed buildings following Israeli air strikes on the besieged enclave.
At least 192 Palestinians, including 58 children, have been killed in air strikes since Israel started its heavy bombardment on Monday.
Victims have been pulled out from under collapsed buildings, where over 1,200 people have been injured.
Medical staff have described horrific scenes at one of Gaza’s biggest hospitals, al-Shifa, which has been overwhelmed by patients.


The air strikes on Gaza have been condemned internationally and by numerous rights organisations, who have called for governments to cease arms deals with Israel.

Israeli Prime Minister Benjamin Netanyahu on Sunday defended the bombing of al-Jalaa tower where several media outlets were based, claiming it housed a Palestinian “terrorist” group’s intelligence office.
On CBS’s Face the Nation programme, Netanyahu described the building as “a perfectly legitimate target”, even though it housed offices for Al Jazeera and the Associated Press.
He said the information regarding Saturday’s attack had been shared with US authorities.
Al Jazeera, the Associated Press and Middle East Eye have condemned the air strikes.

The High Follow-up Committee for Arab Citizens of Israel announced on Sunday that it had approved a general strike in response to ongoing Israeli aggression against Palestinians in Gaza, Jerusalem and many parts of the West Bank.
The committee called for a peaceful strike to take place on Tuesday, including the involvement of local authorities and youth communities in all cities and towns.
The committee is an extra-parliamentary umbrella organisation, made up of Arab members of the Knesset, Arab mayors and leaders of civic movements.


Among the committee’s demands are an end to air strikes in Gaza, which have claimed the lives of over 192 Palestinians since last Monday, as well as the withdrawal of settlers in occupied neighbourhoods.
The head of the committee, Mohammed Barakeh, wrote to the United Nations special rapporteur on minority rights, the European Union foreign minister and the United Nations high commissioner for human rights, among others, calling on them to take action to protect Palestinians in the face of escalating tensions.


“These days, Palestinian citizens of the State of Israel are subjected to a dangerous and excessive violent campaign of bloody attacks by the police, the extreme right-wing mob and settler gangs,” the letter read.
“Palestinian citizens of Israel are collectively worried about their lives. This fear is exacerbated, particularly as it appears that legally binding bodies and law enforcement provide protection to settler mobs,” it added.