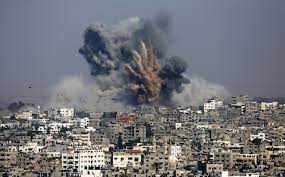 Two women were killed in Israel and dozens were wounded as more than 250 rockets were fired from the Gaza Strip.
The Israeli army struck some 140 targets in the coastal enclave, after Hamas openly joined the hostilities Monday following a weekend of clashes in Jerusalem.
Palestinian media have reported 28 deaths in Israeli strikes, while Gaza’s Hamas and Islamic Jihad continued to rain rockets on Israeli communities along the border.


The Israeli military boosted its presence along the border. Authorities called on local residents to remain at home and near bomb shelters until further notice.

Gaza’s Islamist ruler Hamas said it had fired over 130 rockets towards Tel Aviv on Tuesday night in response to an Israeli air strike that had flattened a tower block in the Strip.
Sirens warning of incoming rocket fire blared in Tel Aviv and central Israel on Tuesday night
“We are carrying (out) now our promise (by) launching a massive rocket strike against Tel Aviv and its suburbs, with 130 rockets, in response to the enemy’s targeting of residential towers,” Hamas’s armed wing said in a statement.

In the early hours of Wednesday morning, following Fajr (dawn) prayers at al-Aqsa Mosque, minor confrontations broke out between Palestinians and Israeli forces who have raided the holy site four times over the past few days.
Tensions between pro-Gaza and pro-Israel protesters peak in New York City


Mounting tensions in Gaza, as a result of air strikes from Israel have translated on the ground in New York City.
Hundreds of supporters of Palestine came out, flags in hand, chanting loudly and calling for freedom for Palestinians.
Opposite them groups of supporters of Israel also crowded around with flags, hurling insults at each other.
Footage shared on social media showed people confronting one another, and reaching over barricades installed by police in an effort to attack one another.