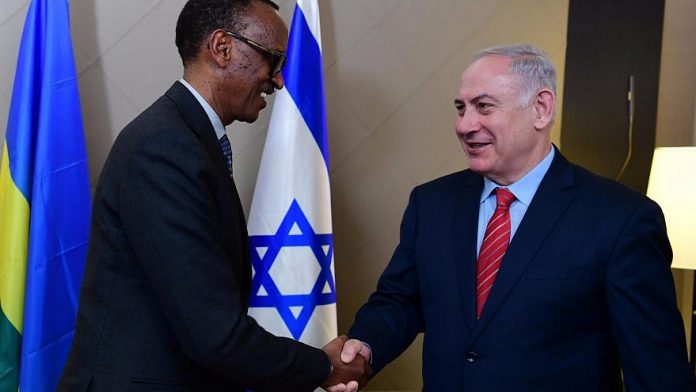 The new office, headed by Ambassador Ron Adam, is the Jewish state’s eleventh embassy on the continent.
The last Israeli embassy opened in Africa was in Ghana in 2011.


“Over the years, Rwanda has proven to be a steady, true friend to Israel. Like Israel, Rwanda is small in area but large in capabilities and aspirations,” the Israel Foreign Ministry said in a statement.
Yuval Rotem, director general of the Israeli foreign ministry, together with Richard Sezibera, Rwandan minister of foreign affairs, inaugurated the embassy in Kigali, capital of Rwanda.


“Israel is returning to Africa. Rwanda is part of our country’s mission to expand presence in Africa and further deepen cooperation with African countries including Rwanda,” said Rotem at the embassy opening ceremony, who was appointed as Israeli Ambassador to Rwanda early this year.
“The opening of the embassy reflects the ongoing strengthening of relations between the two states and will enable expansion of the cooperation between them in many areas, such as education, academia, women empowerment, science and technology, innovation and agriculture.”

“I am confident that the opening of the Israeli embassy in Rwanda will within a few years bring our relations with Rwanda and with the African continent to a whole new level,” said Rotem, who also met with President Paul Kagame during his current trip to the country.
RwandAir, the country’s national carrier, will begin direct flights to Israel in the coming months, the Foreign Ministry statement said. “This will undoubtedly increase tourism between the two countries and boost commercial relations between the business communities.”


Rwanda re-opened the embassy in Tel Aviv in 2015. Rwanda often stands with Israel at the United Nations, where it is currently one of the 47 members of the Human Rights Council. Last month it abstained on four out of the five anti-Israeli resolutions, which the UNHRC approved at its 40th session in Geneva.