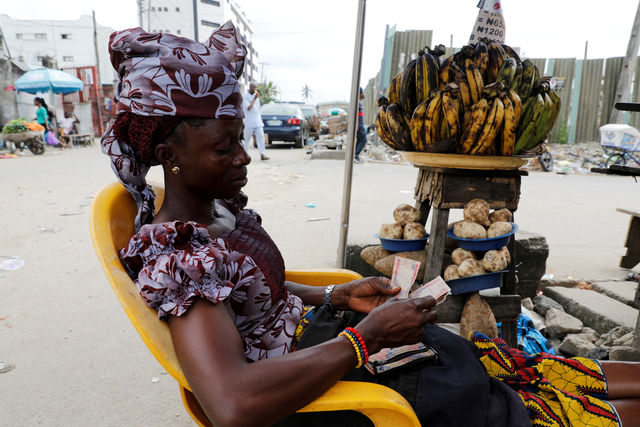 Economic growth is expected to rise to 3.4 percent in sub-Saharan Africa next year from 2.6 percent in 2017, the IMF said in a report on Monday, but warned that rising debt and political risks in larger economies would weigh down future growth.
Nigeria and South Africa are the biggest economies in Africa south of the Sahara, but both nations have been clouded by political uncertainty linked to the tenure of their leaders.


The IMF said a good harvest and recovery in oil output in Nigeria would contribute more than half of the growth in the region this year while an uptick in mining and a better harvest in South Africa as well as a rebound in oil production in Angola will add to growth.
But political uncertainty loomed large in Nigeria, where President Muhammadu Buhari is afflicted by illness, causing speculation about whether he is well enough to run Africa’s biggest economy.
South Africa has been clouded by the rule of Jacob Zuma, who has battled scandals, including corrupt allegations ahead of his ANC party’s conference in December to elect a new party leader.

“Key downside risks to the region’s growth outlook emanate from the larger economies, where elevated political uncertainty could delay needed policy adjustments and dampen investor and consumer confidence,” the IMF said in a report launched in Harare.
“A further pickup in growth to 3.4 percent is expected in 2018, but momentum is weak, and growth will likely remain well below past trends in 2019.”
To help maintain growth, countries should diversify from dependence on commodities and oil, implement fiscal reforms to stimulate growth and attract private investment.
The IMF said public debt would rise to 53 percent of GDP this year from 48 percent in 2016. More worryingly, most countries were now borrowing from local banks, which could distabilise the domestic financial sector and fuel inflation.


Debt servicing costs were also up, but high debt levels were in particular complicating the economic outlook for six nations, including Zimbabwe, which is gripped by a crunch forex shortage.
“Debt servicing costs are becoming a burden, especially in oil-producing countries … and are expected to absorb more than 60 percent of government revenues in 2017,” IMF said.
While some countries had made progress in reducing their fiscal deficits, others, like Africa’s most advanced economy South Africa would see the deficit widen.


South Africa last week raised its estimate for this year’s budget deficit, saying the country faced sluggish economic growth, shortfalls in revenue and costly bailouts of struggling state-owned companies.
Inflation pressures are easing especially in east Africa, which was hit by drought and the governments there increased maize imports to cut food prices. But in other places like Zimbabwe the high cost of imports is raising price pressures.
Source: Reuters