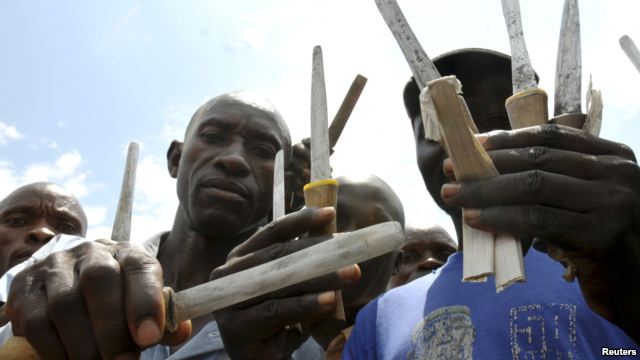 The state minister for Gender and culture, Peace Mutuzo has asked government to ban the Bagsisu and Bamasab culture of ‘Imbalu’ de She described the practice and backward and barbaric.
The minister made the remarks while addressing journalists at Uganda media centre ahead of celebrations to commemorate international day of family due May 15, 2017 with a theme “Strengthen the Family: Build a Nation”.
The imbalu ceremony held during even years (August and now even December). It is after this occasion that the Bagisu boys aged 16-25 graduate to manhood. It involves the entire local community.


Now the minister wants gazetted hospitals, clinics and dispensaries to carry out the circumcision, which she says prevents the spread of HIV/AIDs as opposed to the ‘Imbalu’ where one knife is used to cut many boys during the ceremony.
” The people of Mbale to stop or reduce dehumanizing the habits of circumcision which are invoking sexuality. The ‘Imbalu’ culture is really a backward one. It’s important for men to circumcise but we would wish to encourage people to do it in a manner that gives dignity to those young men,” she said.

The minister says running around and chasing those small boys for three weeks and this young man implies into his mind that he has to practice sex on another juvenile. And this girl according to their culture, they are not supposed to meet again, is an abuse.


She added: I am aware of the advantages of circumcision, but it should be done in a proper and dignified manner not to make a boy of 13 years after healing from the wounds and start to engage in sexual activities since he has been initiated into manhood.
The origin of Imbalu
According to Kaziba, the first Mugisu man that was circumcised had the reputation of a womanizer, seducing women in is vilage and beyond, including many who were married. He was brought before the elders who decreed that he should be castrated as a punishment and a deterrent to other to other men.
Something did not work out as decreed, he was only circumcised and after he recovered he continued his ways of old seducing even more women, it was said by some of them that he had become an even better lover.
Other men not wanting to be left out on such pleasures had themselves circumcised in order become like the first Mugisu who was circumcised.