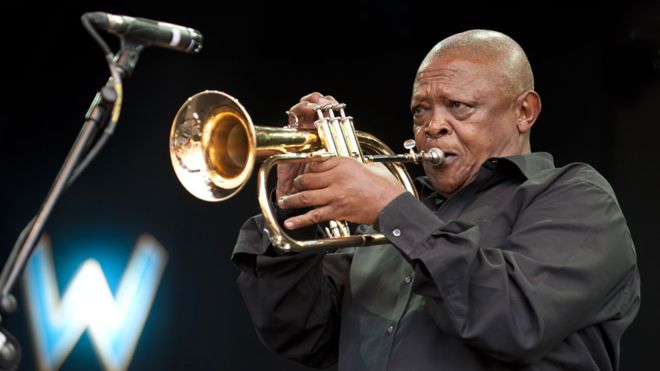 Legendary jazz trumpeter Hugh Masekela, a leading figure in the struggle to end apartheid and “the father of South African jazz”, has died aged 78.


In a statement, his family said he had “passed peacefully” in Johannesburg “after a protracted and courageous battle with prostate cancer”.

Masekela gained global recognition with his distinctive Afro-Jazz sound and hits such as Soweto Blues.

The 1977 song became synonymous with the anti-apartheid movement.


Born in the South African town of Witbank in 1939, Masekela was inspired to learn the trumpet after seeing Kirk Douglas play Bix Beiderbecke in the 1950 film Young Man with a Horn.

He persuaded one of his teachers – the anti-apartheid crusader Father Trevor Huddleston – to buy him an instrument, promising to stay out of trouble in return.
In 1960, aged 21, he left South Africa to begin what would be 30 years in exile from the land of his birth.


Under the tutelage of Dizzy Gillespie and Louis Armstrong, he was encouraged to develop his own unique style.

In 1967, he performed at the Monterey Pop Festival alongside Janis Joplin, Otis Redding, Ravi Shankar, The Who and Jimi Hendrix.

The following year, his instrumental single Grazing in the Grass topped the charts in the US and became a worldwide hit.


Masekela returned to South Africa in 1990 following the release of Nelson Mandela, whose freedom he had called for in his 1986 anthem Bring Home Nelson Mandela.

In June 2010, he performed at both the opening concert of the Fifa World Cup and the tournament’s opening ceremony in Soweto’s Soccer City.
//BBC