Corruption under South Africa’s former president Jacob Zuma was enabled by international banks, companies and governments which should now seek to recover the loot they helped to launder, British lawmaker Peter Hain told an inquiry on Monday.


HSBC, Standard Chartered and India’s Bank of Baroda as well as their senior directors were “directly culpable” in the looting of South Africa’s treasury under Zuma, Hain said in his submission to the Judicial Commission of Inquiry into Allegations of State Capture.
Hain was invited to give evidence because he had already named several corporates he was investigating under parliamentary privilege in 2017 as complicit in state capture.

HSBC said it fully supported the commission’s inquiry, while Standard Chartered said there was no evidence linking it to the Guptas directly. Bank of Baroda did not respond to a request for comment.
“They’re all up to their neck in this,” he told the inquiry at his appearance.
“They continued because of course the corporates concerned, including the banks, were making money out of it…The Guptas could not have amassed this illicit wealth without the corporates and the banks … being their little helpers.”


Zuma, who was removed as president last year over corruption allegations, is facing a judicial inquiry. He has agreed to cooperate but has dismissed the probe as prejudiced.
Part of its brief is to investigate accusations that the Guptas – prominent businessmen brothers Atul, Ajay and Rajesh — influenced Zuma over political appointments and state contracts.
Hain, a labour lord and former anti-Apartheid activist, called on the banks, global corporates and foreign governments to cooperate better so all those involved are brought to justice.


In his submission he said a number of international banks helped the Guptas cloak the source of their funds – by allowing them to open and maintain bank accounts, even after allegations of their involvement in corruption became public, and also by allowing them to transfer illicit funds into these accounts.
“The warning signs were there and they did very little about it,” he said of the banks, adding that when he had tried to question the banks after he had named them in parliament as complicity he “found a great reluctance, citing … client confidentiality, which is the excuse they hide behind…. The international banks, HSBC, Standard Chartered and Bank of Baroda are hiding behind this principle to conceal their complicity.”


The role of global finance in facilitating corruption, fraud and money laundering has come under increasing scrutiny over the past decade, but the fight against financial crime is mostly dealt with by national authorities who often fail to cooperate effectively.
Among his recommendations are to improve transparency around the beneficial owners of companies. He also proposes better programmes for auditing the due diligence conducted by banks to ensure that they are complying with anti-money laundering laws, and stiffer penalties for individuals and organisations that fail to do so.


An HSBC spokeswoman said the bank will continue to investigate any potential links to the Guptas or Gupta-related individuals and companies should new information come to light.
“This is no easy task given the lengths to which the Guptas have gone to disguise their activity,” she said.
A spokesman for Standard Chartered said: “We have found no evidence that we banked the Guptas directly, but we closed all accounts we identified as linked to their business interests by early 2014.”


It declined to comment further on the grounds of client confidentiality.
The Guptas also deny the accusations and say they have been victims of a political attack. They have since closed their South African operations in mining, media and technology.
Hain’s report said that they currently reside in Dubai, and call on the Dubai authorities to extradite them to South Africa to face questioning over the allegations.
////Reuters 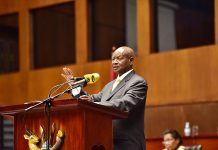