Home Business How UDB buffered the economy from shocks during Pandemic 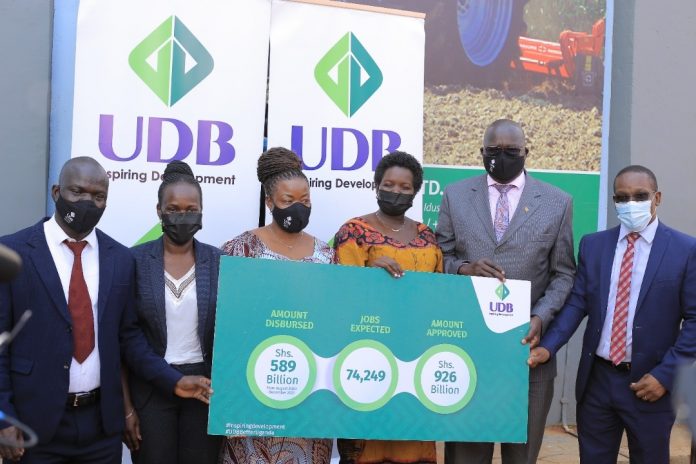 The Uganda Development Bank Ltd (UDBL approved projects worth Shs926 Billion of which a total of Shs589 Billion has so been disbursed into the Ugandan economy to support businesses during the Covid-19 pandemic period (August 2020, to-date).

This disbursement represents the largest investment in the post-COVID recovery effort in the country where the government through UDB is prioritizing growth through localized value addition, production and import replacement in alignment to the National Development Plan III.


The funds were deployed to support the resilience and fast recovery of the economy during and post the pandemic to through import replacement and export.

“At the onset of the pandemic, the Government implemented a raft of measures to support the resilience and a faster recovery of the country’s economy.

As part of these measures, the government committed to capitalize UDB with Shs1 trillion; out of which Shs585 billion was extended to the Bank as part of additional funding. Of the Ush 585 billion, Ush455 billion was to be deployed to support the economy to be self-sustaining during the pandemic and was extended to the three key economic and productive sectors of Primary Agriculture, Agro-Industry and Manufacturing. There is evidence that indicates that the economy is responding well despite the conditions brought on by the pandemic, a trend that is likely to continue now that the economy is being fully opened,” Ms Patricia Ojangole, the Managing Director UDB said during a press conference in Lira City.


“The number of agriculture and manufacturing projects that use agricultural produce as input has tremendously increased in the past years, which is an indicator that UDB financing is connecting the farmer and processor to a final consumer of quality Ugandan made goods.”

Total loans approved between August 2020 and December 2021 for the three sectors of Primary agriculture, agro-processing and manufacturing alone were Shs695 billion of which Shs459 billion has been disbursed to date. Disbursements are ongoing for the undisbursed amounts in line with project implementation milestones.

Ms Ojangole added that financing a diversity of manufacturing enterprises complements the government effort to realize increased industrialization in the country.


“Local manufacturers embraced the government call for import substitution and started or scaled up the production of essential and imported products like masks, sanitizer, plastics, textiles and paper products among others. Uganda not only became self-sufficient but also exports some of these manufactured products to the region and the world,” Ms Ojangole said of further evidence of the performance of the government policy.

Other sectors where UDB invested during the period are human capital development (health and education services), infrastructure and tourism, accounting for 22% (or Shs130 billion) of the bank’s total disbursements

UDB’s mandate is to accelerate social economic development in the country through sustainable financial interventions. Consistent with its mandate, the Bank supports projects within the private sector that demonstrates potential to deliver high social economic value, in terms of job creation, improved production output, tax contribution and foreign exchange generation among other outcomes.

The development outcomes (ex-ante) upon implementation of the approved projects registered between August 2020 and December 31 2021 are as summarized below;


In her closing remarks, Ms Ojangole applauded the government’s support and commitment to strengthening the Bank’s capital base as it delivers its mandate to improve the quality of life of Ugandans.

The Bank will in 2022 and beyond, focus on expanding its contribution in the country’s development, and will among other interventions, focus on widening its reach amongst the underserved segments of the population to include the Youth, Women and SME’s.