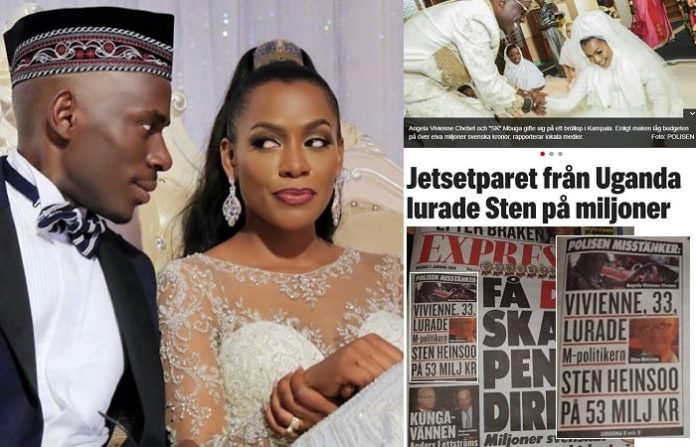 
You work hard and at the end, you have nothing to show. On the other end, some Ugandans splash money like they harvest it from trees. What they exactly do remain a mystery. Wonder no one. One by one, they are being exposed.
It has emerged that in 2016 or there about SK Mbuga’s wife Vivienne Birungi [ Jalia Mbuga] while working Sweden[ taking care of elderly people]defrauded Swedish politician Sten Heinsoo of Ugx. 23 billion promising to supply him 200kgs of gold, only to disappear in thin air.


SK Mbuga and wife went ahead to live lavish life in Kampala [drive most expensive sporty cars] organized and extravagant wedding in 2016.
Unfortunately the couple’s luck might have run out early this week when Expressen, a Swedish newspaper published a story pinning Vivian Chebet for luring a Swedish politician, Sten Heinsoo with false promises of love and gold which resulted into the fraudulent transfer of 53million kronor (Shs23billion) to her accounts.


The Newspaper reports that the former head of state and county politician Sten Heinsoo, 71, was suspected of gross fraud after disappearing with between 45 and 48 million Krona from the Rank family, owners of a real estate giant Einar Mattsson.


When confronted by the custodians Heinsoo confessed that the money had disappeared abroad when he tried to help a female friend to transport gold from Uganda to Sweden. Preliminary investigations have led the Swedish police to our very own power couple of Sulaiman “SK” Mbuga, 34, and his wife Angella Vivienne Chebet, 33.
Last week, Sten Heinsoo was charged with gross negligence against the principals of trust. Even Chebet – who is a Swedish citizen for a few years – was charged by the Stockholm District Court for several cases of gross fraud against Heinsoo in absentia. “SK” Mbuga has also been dragged into this verdict for probable same reasons suspected of the same crime.

Heinsoo says he met Vivienne in 2012 and the two have since been in a “companionship”. Her lawyer confirms that they have had a relationship over a couple of years.


Two years ago, Heinsoo, says Vivienne told him that her wealthy father in Uganda had passed away and left 200 kilogrammes of gold to her, valued at about 50 million Krona. Heinsoo told police during interrogation that he offered to help move the cargo to Sweden by taking care of insurance costs, taxes, customs duties and the like.
Vivienne’s lawyer denied the story, saying her client had never received such amounts of money from Heinsoo.
SK Mbuga and his wife’s have reportedly fled for safe heaven.