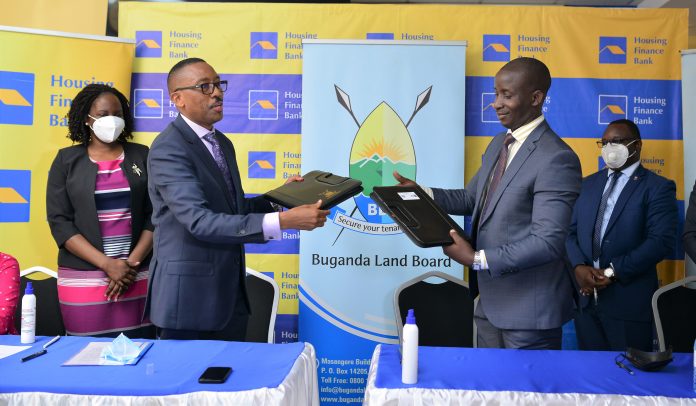 Housing Finance Bank has strengthened its partnership with Buganda Land Board, (BLB), with strengthened focus on easing the process for Bibanja/kibanja owners to acquire lease-hold certificates of title.
The kingdom, in a bid to speed up the Kyapa processing time has launched a campaign called the “Express Plan”. The Express Plan is meant to shorten the processing time from the current 6 months to 1 month.
In 2013, Housing Finance Bank and Buganda Land Board signed the first agreement aimed at providing easy access to financing. This has been identified as a major obstacle for tenants keen on having security of tenure. Over the years, the two parties have participated in various campaigns to increase the number of land lords on the kingdom’s land.


Commenting about the new initiative, Housing Finance Bank Managing Director Mr. Michael K. Mugabi commended the Buganda Land Board for their consistency and innovativeness in addressing the issues relating to titling and development of Bibanja land. “By shortening the processing time from 6 months to 1 month, several prospective land-owners will now find it easier to secure their tenure with the kingdom.” He said.
According to the process flow discussed by the two parties, the kibanja owners simply have to approach Buganda Land Board and open a file, present proof of ownership of the land, and they will be recommended to Housing Finance Bank for a loan that would cover the 100% funding requirement for obtaining a lease hold certificate of title.
This process according to housing finance can be concluded in seven days.

The Chief Executive Officer of Buganda Land Board, Omuk. Simon Kabogoza applauded Housing Finance Bank for being one of the most committed partner banks under BLB’s signature product called Lease Access Financing Initiative (LAFI).
“the LAFI initiative has so far benefitted more than 2,000 people on Kabaka’s land to get titles through loans from partner institutions. We are proud to say that no client has ever defaulted on their loans,” he said.
Kabogoza further urged tenants on Kabaka’s land to adopt this initiative and acquire land titles given the existing fragility on land ownership in the country.


He said that Buganda kingdom is pro-development and they believe that a person with a land title can progress better than their untitled counterparts given that a title can be used to acquire credit, get a development plan approved and most importantly, it ensures security of tenure.