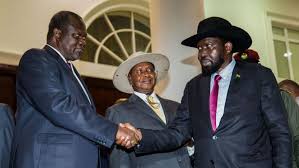 South Sudan’s President Salva Kiir and rebel leader Riek Machar signed a much-anticipated peace deal on Wednesday, the latest attempt to end five years of a vicious civil war that’s torn the world’s youngest nation apart.
Seated before a roomful of regional leaders, diplomats and officials convened in the Ethiopian capital, the two men signed a document meant to end a conflict that began in 2013 and quickly spiralled into a regional crisis.


Hopes were high that the agreement, the details of which were not announced, will end the war which has cost the lives of tens of thousands of people, pushed millions to the brink of starvation and scattered refugees across East Africa.
“The eyes of the world are upon us as the South Sudan leaders commit today to press for reconciliation and lasting peace in their country,” said Ethiopian Prime Minister Abiy Ahmed at the start of a brief but delayed closed-door meeting after which Kiir and Machar emerged to sign the document.
The agreement was greeted with applause and ululations from the delegates, but also concerns from some parties that it might not be honoured.

Since the civil war began in December 2013 — following Kiir’s claim that Machar was plotting a coup — the Intergovernmental Authority on Development (IGAD) regional bloc, chaired by Ethiopia, has taken the lead on peace negotiations, to little effect.
The last peace pact collapsed in July 2016 during days of fighting in the capital Juba that forced Machar to flee for his life.


Words of scepticism
Speaking prior to the agreement’s signing, David Shearer, head of the UN Mission in South Sudan, sounded a note of caution.
“With the signing of this revitalised agreement, we should publicly acknowledge it is but one step on the road to peace, but one which lays the foundation for all that follows,” he said.
His fears were echoed by Britain’s Chris Trott, who spoke for the Troika bloc that also includes Norway and the United States and provides key funding to the peace process.


“We remain concerned about the parties’ level of commitment to this agreement,” he said, citing recent fighting in the northwestern city of Wau and the deaths of 13 aid workers in South Sudan this year alone.
The US last week said that 107 aid workers and 13 journalists had been killed since the war began.


“The Troika is committed to peace in South Sudan. But in order to be convinced of the parties’ committment, we will need to see a significant change in their approach,” Trott said.
After decades of civil war, South Sudan voted to leave its northern neighbour Sudan in 2011, becoming the world’s youngest country.