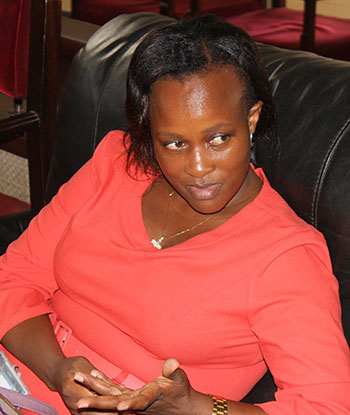 Brian Isiko, a YMCA Jinja Branch student who was early this month sentenced to Luzira Prison for two years for stalking the beautiful 41 year old Kabarole Woman MP Hon Sylivia Rwabogo, appeared in court on Tuesday for hearing of his appeal.


Buganda Road Court grade one magistrate Gladys Kamasanyu sentenced Isiko to two years in prison after he pleaded guilty to charges of cyber harassment and offensive communication on 5th July 2018.

Through his lawyers, Isiko asked for court bail. he also claims the magistrate erred in law. Isiko also accuses the magistrate of engaging in speculation, conjecture, malice and fear mongering in denying the appellant a proper mitigation while sentencing him. Isiko’s lawyers now want court to quash Isiko’s conviction and set aside his sentence or alternatively the custodial sentence be reduced and set aside and a small fine be imposed


High court judge Jane Francis Abodo set Friday 3rd July 2018 to deliver the ruling on the bail .
Among the grounds for his bail application, Isiko noted that his custodial sentence was likely to hamper his studies at YMCA Institute, Jinja Branch. Isiko further stated that the case on which he was convicted didn’t involve any violence; that he has a fixed place of abode under the jurisdiction of this court, and that he is a first offender.
He presented two sureties; Grace Regan Muganza a retired UPDF officer and current coordinator of the Reserve force; as well as Wako Godfrey, the Assistant Academic Registrar of Kyambogo University, who is also his paternal uncle.


Nyanzi Gladys the state prosecutor handling this matter, opposed this application saying that Isiko didn’t prove his place of residence since he claimed he stays with his grandmother Alice Matende, who wasn’t in court to confirm. “He also presented an admission form without any other document like Identity card or Results from previous semesters to prove that he is a student

More than just love- Ms Slyvia Rwabogo speaks out
“Before you go on judging me and scolding me, I want to let you know that there’s more than meets the eye in all this saga that has turned out to be a national issue. What most of you regard as mere love messages should know that this was not just love messages. This boy was being used by some selfish individuals in a mission to lure me with love and kill me,” a social media page registered in her names posted days after the judgement.
According to the post, Rwabogo reported the case because she did not want to die like former Butaleja woman MP Cerinah Nebanda.


“I endured fear and suffering due to those who sent Brian to trap and kill me. Nebanda was killed in such a way. I didn’t have to wait to be killed, as a precautionary measure I had to seek the solace of authorities to protect myself, my family and constituents from horror. If it was for love, I have had many even those younger than Brian and much older, but this was none like other with intentions to harm me,” the post read.


Asked why he was stalking a woman almost twice his age , Brian told trial magistrate, Ms Gladys Kamasanyu that “…….I did not have any bad intention ….. I wanted her to become a personal friend….’’