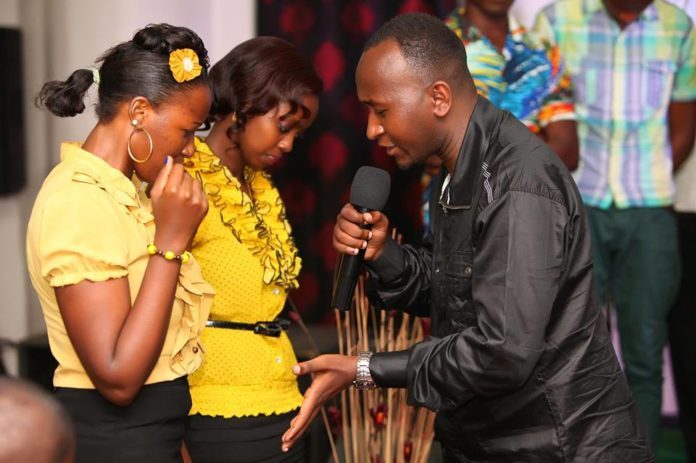 Pastor Mbonye’s Church is organizing a mega gala dinner on 1st September 2017 for the man of God. “We are to buy seats on that day and it’s in categories according to how you want to stretch yourself and believe God for.” The message circulating on social media reads in part.


In the message, it’s also indicated that believers will have to pay a minimum for Ugx. 300,000 a single seat. The other seats go for Ugx. 500,000, Ugx. 750,000 and Ugx. 1,000,000 for Silver, Gold and Platinum tickets.
“We’re honoring him with our Finances and love all this at his feet,” the message reads.
February this year, Prophet Elvis Mbonye was hosted on NBS tv People and Power program where he disclosed that he had a rare chance to chat with God.

NBS tv host Mable Twegumye: Have you seen God?
Prophet Elvis: I have seen Jesus and the most pronounced thing is his eyes. He looks at you with no condemnation whatsoever.
‘‘I have walked to Heaven and what most people don’t realize is they too can. When the veil rent, Heaven was opened. There is a higher life than what people have known before. Everyone should be introduced to the spiritual life.’’ He said.


Last month, the man of God went shopping only to land on a state of the art Range Rover 2016! Prophet Mbonye’s Range, probably the only one of its kind in Uganda at the moment, is valued at not less than Ugx. 650m!