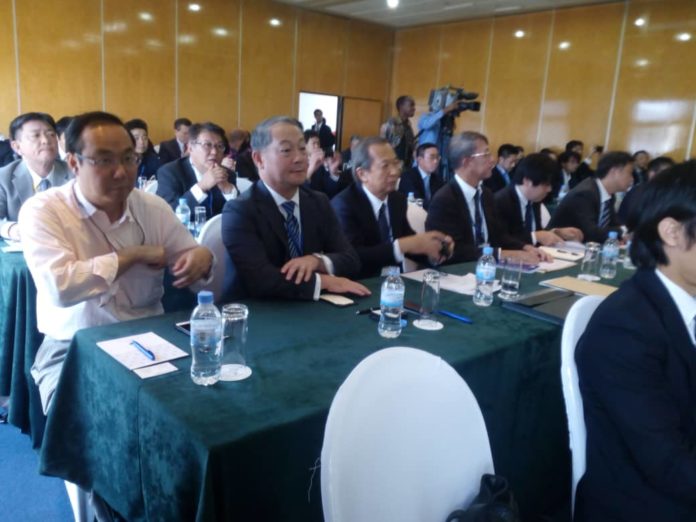 As part of its strategy to forge further partnerships as well as increased Japanese investment in Rwanda, the Rwanda Development Board (RDB), alongside the Rwanda Mines, Petroleum and Mines Board, Ministry of Agriculture and Animal Resources, Ministry of Infrastructure, Ministry of ICT, Ministry of Trade and Industry and the Ministry of Finance and Economic Planning, today met with a high-level Japanese delegation led by the Japanese Parliamentary Vice-Minister for Foreign Affairs, Manabu Horii, in the Japan-Rwanda Ministerial Panel.

Addressing the Japanese delegation in her opening remarks, the RDB Chief Executive Officer, Clare Akamanzi, thanked them for visiting the country.
“This session, with the key ministers of your choice, is intended to encourage an open conversation. We have seen an increased number of Japanese investments in the country and it is my hope that this delegation builds on this”, she concluded.


Japanese investments in Rwanda total USD $21,458 million have created 178 jobs. These investments are in agro-processing, horticulture, mining, ICT and service sectors.
In his speech, Vice-Minister for Foreign Affairs, Manabu Horii, said that Japan is looking for increased cooperation.


“We would like to increase our economic ties and bring them to the next level. Japanese companies are interested in Rwanda because of its economic growth. The Government of Japan aims to work with the Government of Rwanda to increase trade and investment between the two countries”.
The delegation will hold a business seminar and business matching in collaboration with RDB on 25, July.