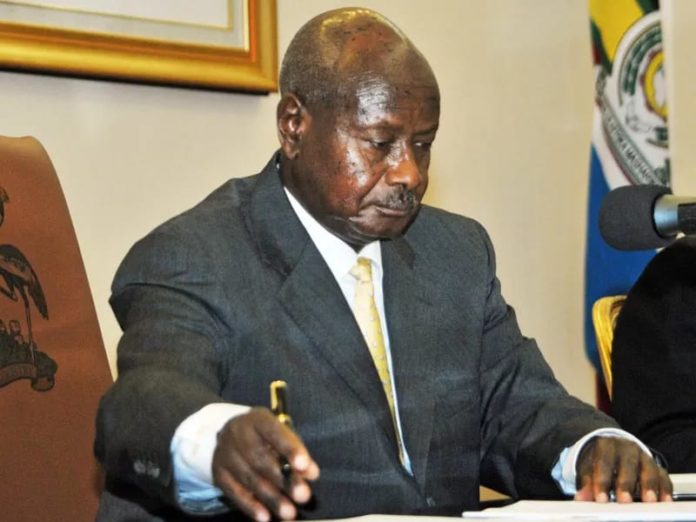 President Museveni has said that God loved Uganda so much that he gave it all -a beautiful, unique country that is lacking nothing.
‘‘This is where we Ugandans are leading. God endowed us with a lot of opportunities. There is nothing that is not in Uganda. Elsewhere you find their countries are deserts like in Egypt. But our country is a country of plenty.’’ The president said recently while in Kihihi, Kanungu on June 28.
He however, said Ugandans have disobedience God by destroying all wetlands, forests, swamps and God seems to be annoyed and about to ignore the country.


‘ ‘ God loved Uganda so much but because of the disobedience of the people, God has become disillusioned and now seems to have ignored us.’’ The president noted in his state of environment address in Kanungu western Uganda.
Quoting the book of Genesis, the president said: God ordained the world as it should be. When He created man, He told him to look after this creation and establish dominion over nature and dominate the world. He told man, whom He created at the end of all creation and in His own image to dominate all creation, multiply and fill the earth.

‘ ‘Now, to multiply and fill the earth, that you have fulfilled, I cannot say you are lacking there. No, that one you have achieved. But there are two things that have not been done-: To disobey God and destroy wetlands and turn them into gardens. Do you, by that act, think God did not know what He was doing when he created wetlands? ‘’
The State minister for Finance David Bahati recently revealed that Uganda’s population is about to reach 40 million.
‘ ‘God planted these wetlands with noble intentions. You now put potatoes where God had put marshes. But God designed that potatoes will be planted on hillsides and valleys so that wetlands become water reservoirs like we have granaries for grain storage, wetlands are for water storage. But now you are destroying these water reservoirs saying God did not know what He was doing.’’


The president said Uganda has now started seeing the consequences of destroying wetlands.
‘ ‘Now God has given us a punishment – prolonged drought. I am told the drought [ in Kanungu] has been here for the last three years. Scientists say that 40% of the rainfall we receive comes from the wetlands and swamps, lakes and forests of Uganda. Now to destroy our swamps means we are depriving ourselves 40% of our potential to create rainfall. Therefore, we are the losers we in the valleys because the little rain that is available only remains in the hills and mountains. That is the punishment God has given us for degrading and destroying our wetlands.’’ He said.

In his concluding remarks the president said ‘‘the Bible says that what one sows is what one will reap. We are reaping what we sowed. The good side is that our God is a forgiving God.
He asked those cultivating in swamps and planting eucalyptus trees to vacate the swamps and wetlands so that we find an answer to the drought and associated disasters.