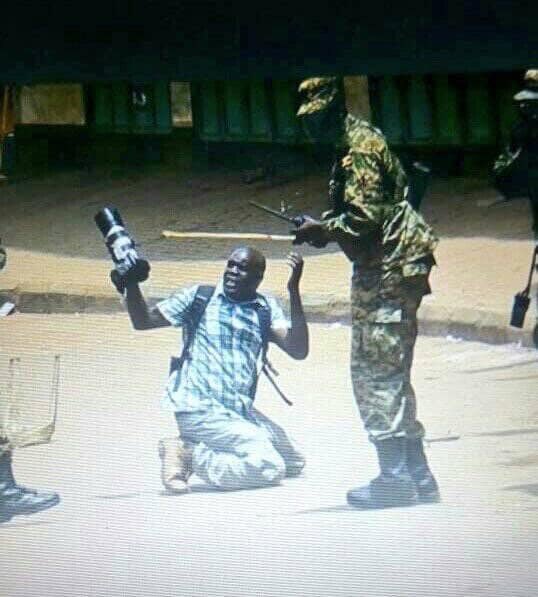 The Chief of Defence Forces (CDF) Gen David Muhoozi has ordered for the arrest and punishment of ‘unprofessional’ soldiers who molested journalists during #FreeBobieWine protests on Monday in Kampala.


This comes after James Akena, a photographer working for Reuters, NTV journalists Ronald Galiwango and Juma Kirya and Alfred Ochwo working with the Observer, were beaten by soldiers, arrested and detained for several hours as he covered the ‘Free Bobi Wine’ political protests in Kampala.
The CDF also apologized for the horrific incidents. Akena said he was detained for several hours after being beaten by soldiers.

“I was just standing holding my camera near to the protest. Suddenly there were many soldiers hitting me. I have some bruises and my hand is swollen. They still have my camera and I don’t know when I’ll get it back,” he said.
A video of soldiers beating Akena has since gone viral. Police and military on Monday used live ammunition and tear gas to disperse off the people who were demonstrating against the torture and arrest of Kyadondo East MP Bobi Wine and four other MPs.


In a statement issued on Tuesday, the Defence Ministry spokesperson Brig Richard Karemire noted: “Attention has been brought to the leadership of the UPDF about the unprofessional conduct of soldiers who molested some journalists while deployed on a Joint Operation in the capital city on Monday 20th August 2018.”
“UPDF wishes to express its displeasure over such behaviour by those individuals, and as a result, the Chief of Defence Forces (CDF) has ordered for their arrest and punishment.”


CDF asked to name UPDF soldiers
Human Rights Lawyer Nicholas Opiyo hailed UPDF leadership for this development, he however demands that UPDF names the soldiers who committed the crimes against journalists.


‘ ‘For this to make sense, we demand the names of the soldiers involved, their rank and names of the commanding officers. We want to bring criminal charges against them in their own individual capacities. We also want a one Kiwanuka who was involved in the Pacific Hotel incident in Arua’’ he said.