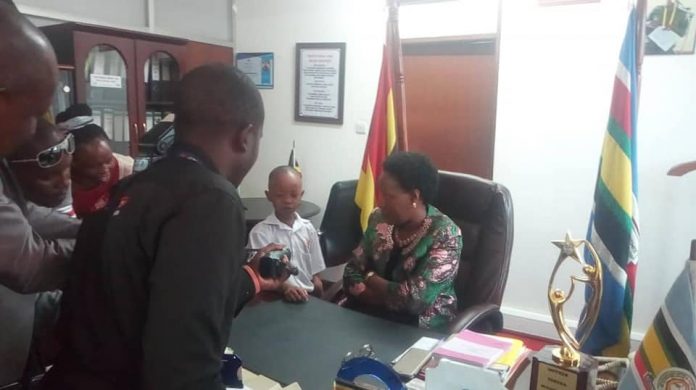 In an interview aired on NBS TV on Monday, the seven year old rapper, Patrick Ssenyonjo best known as Fresh Kid was asked who he looks up to in the music industry.


Without hesitation, he said Eddy Kenzo and Fik Fameika, and no mention of Bebe Cool.
Meanwhile, the Bambi artiste, on Tuesday held a meeting with Minister of State for Youth and Child Affairs Hon. Florence Nakiwala Kiyingi.
The Minister agreed with Fresh Kid’s team to have him sing after school hours.
In the meeting, Nakiwala said that the rapper is free to go on with his performances as long as he still remains in School.


The Minister also offered the rapper five million shillings cash to go towards the recording of Fresh Kid latest song Bambi. The minister also pledged to pay Fresh Kid’s school fees until he completes Primary Seven.
The Minister added that Fresh Kid should critically observe and respect the time he is at school as stipulated by Ministry of education as well as his School, he should not go performing at the time he is supposed to be in Class and must deliver satisfactory/convincing results at the end of every term/ year.

The meeting came after Fresh Kid released new song titled ‘Bambi’ in which he called out to the minister Nakiwala to stop her sanctions against him.
The Minister had earlier banned Fresh Kid from singing. She threatened to subject Fresh Kid to drug test and Counseling.


In the song, Bambi, which can be translated as “Have mercy, Please.” Fresh Kid narrates that as he was home seeing his parents struggle [his mother is makes Chapati/ Rolex, while the Dad is casual worker] to make ends meet, he asked God whether He could avail him something to do to also bring in some income to the family.
He raps that stopping him from performing would be condemning him and his family to poverty again, taking away the glimmer of hope that his raping talent has brought the family.