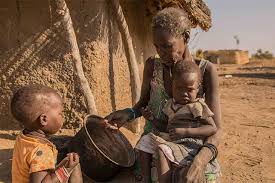 In the Democratic Republic of the Congo (DRC), the food security situation remains dire with one in three people – a record high – suffering from acute hunger, two United Nations agencies, the Food and Agriculture Organization (FAO) and the World Food Programme (WFP) warned today.
The number of people affected by high acute food insecurity in the DRC is estimated at 27.3 million or one in three people, including nearly seven million people grappling with emergency levels of acute hunger , according to the latest Integrated Phase Classification (IPC) analysis.


This makes the central African country home to the highest number of people in urgent need of food security assistance in the world.
“For the first time ever we were able to analyse the vast majority of the population, and this has helped us to come closer to the true picture of the staggering scale of food insecurity in the DRC,” said Peter Musoko, WFP’s representative in DRC.
“This country should be able to feed its population and export a surplus.”

Conflict remains a key cause of hunger with large swathes of the conflict-affected eastern provinces of Ituri, North and South Kivu and Tanganyika, as well as the central region of the Kasais, the scene of recent conflict, the worst hit.
Other key factors compounding this crisis include the slump in DRC’s economy and the socio-economic impact of COVID-19.


WFP staff have met families who have returned to their village to find their home burnt to the ground and their crops entirely looted. Some have been surviving by eating only taro, a root that grows wild, or only cassava leaves boiled in water.
FAO and WFP call for urgent intervention to scale up support to Congolese in crisis areas.