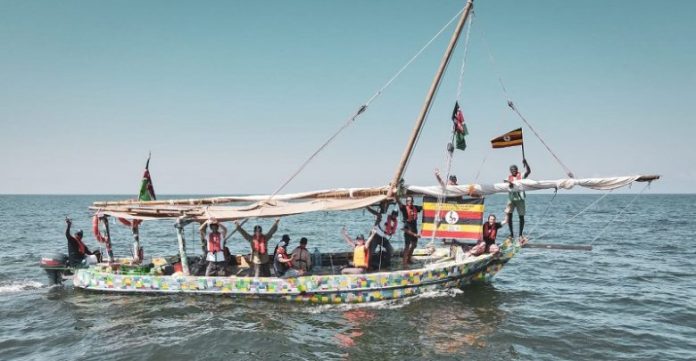 Flipflopi, the world’s first sailing boat (‘dhow’) made from 100% recycled plastic, has embarked on a historic expedition by sailing around Africa’s largest freshwater ecosystem – Lake Victoria. The voyage aims to send an urgent message to the East Africa community on the need to end the unnecessary single-use plastic scourge that is threatening the region.
Lake Victoria, supporting 40 million East Africans, symbolises the catastrophic effects of human activities and climate change, among other issues, resulting in significant water pollution which threatens the health and livelihoods of communities.


A recent study estimated that 1 in 5 of the fish in Lake Victoria had ingested plastic. Another study ubiquitously recorded microplastics in surface waters in several sites of Lake Victoria.
At the heart of the plastic waste problem is the linear ‘take-make-dispose’ model of consumption, as products get manufactured, bought, used briefly, and then thrown away with obvious examples like plastic water and soda bottles and ketchup sachets.
The Flipflopi project showcases alternative uses of plastic waste and the possibilities of circular economy approaches to tackle pollution. The Flipflopi dhow has already spent a week in Kenyan waters and has now arrived in Uganda to bring its positive campaign to help convene communities and policy makers in discussions to help tackle plastic pollution and find new solutions in place of single-use plastics.
“We cannot underscore the damaging effects plastic pollution has on our water bodies. We can and must act and save our environment from unnecessary pollution. The solution starts with all of us and we require a behaviour change of no plastic waste” said Ministry of Water and Environment Minister Sam Cheptoris.

The Flipflopi is now making several more stops along the lake including Jinja, Kampala and Entebbe, running events to engage schools, communities, conservationists, business leaders and policymakers in discussions, whilst demonstrating alternate uses of waste plastic and running educational workshops with children in the area.
“Flipflopi was built to show the world that it is possible to make valuable materials out of waste plastic, and that single-use plastic really does not make sense,” said Ali Skanda, co-founder of the Flipflopi project and builder of the world’s first recycled plastic dhow. “We wanted to come to Lake Victoria to bring the message upstream to where the source of the problem begins, and because the pollution does not know the borders within the water it’s so important we tackle this together.
The Flipflopi project is supported by several partners including the UK Government which is committed to supporting countries across the world to protect vital ecosystems through initiatives such as 30by30, the forthcoming £500 million Blue Planet Fund and promotion of the Leaders Pledge for Nature which Uganda has also signed up to.
The British High Commissioner for Uganda, Kate Airey said: “Drawing attention to climate change and plastic pollution has never been so important as right now. As co-hosts for COP 26, the UK Government recognises the clear significance of taking this message from Uganda, East Africa and to the rest of the world. The Flipflopi Project is an inspiring example of the urgent need to tackle plastic waste and the huge opportunity for Uganda to shift to a circular economy, that creates new products from waste materials, whilst bringing prosperity to communities, and cleaning our environment.”


Flipflopi is just one example of the circular economy in action. In Uganda, the women who set up Reform Africa are turning plastic waste into sustainable and waterproof bags, whilst providing school children in rural areas with bags for free. In Kisumu, CIST Africa are making hand sanitizer from invasive water hyacinth. In Tanzania, a collective of local artisans known as ‘Made by Africraft’ are introducing youth and the unemployed to developing sustainable handicrafts to create a livelihood.


Flipflopi arrived in Uganda on 12th March and coincides with Ugandan Water and Environment Week, whose theme this year now includes focus on plastic pollution.
As part of the expedition, the Flipflopi expedition is running a petition calling for a regional ban on single-use plastics. The main event on 20th March 2021 will be graced by Queen of Buganda Nnabageera Sylvia Nagginda who will be the Guest of Honour.