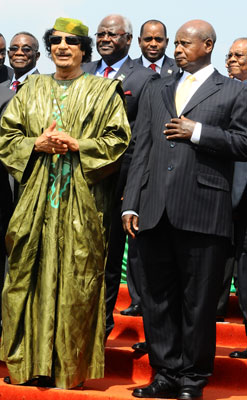 In 2010, WikiLeaks, a whistleblower website, published a memo claiming Museveni is understood to have told the US Government that he feared that Gaddafi, his longtime ally, would shoot down his plane as he travelled over international airspace.


Museveni’s fears of a possible assassination were expressed to America’s former top ambassador on Africa, Ms Jendayi Frazer, at a meeting on June 13, 2008.
According to the classified memo, President Museveni reported to the US that he feared Col Gaddafi would eliminate him because he had opposed the Libyan leader’s push for the creation of a United States of Africa.

read: Museveni regrets not ‘teaching’ the west a lesson when they attacked Gaddaffi

“President Museveni said Libyan President Qadhafi ‘is a problem’ for the continent and is pushing for the creation of a ‘United States of Africa’ to be governed by one president,” Ms Frazer is quoted as saying, in the classified memo.