Home Business Flamboyant Ezra watching a Cranes game at Namboole. … Where is he? 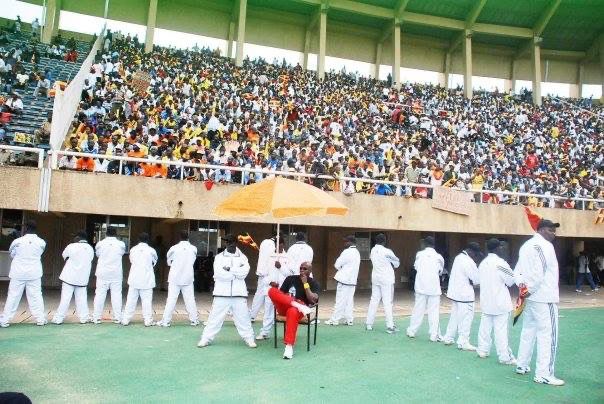 The owner of SunSpace International, a holding company registered in the Seychelles, and a founding patron of the Ezra Track Team Board, a sports philanthropic financing and talent search agency


November 2006, he paid over a $250,000 for an exclusive Mont Blanc wristwatch. The “one of one” timepiece was the object of an Emirates auction commemorating 100 years of Mont Blanc. The timepiece was handed over to the Ugandan Businessman by His Highness Sheik Ahmed bin Saeed Al-Maktoum in Duba
September 2007, when the Uganda Cranes played Niger, Ezra landed at Namboole stadium in a private chopper. With an army of bodyguards [clad in white] surrounding him.
He awarded The Cranes US$100,000. Awarding the coach $15,000, two assistant coaches $2,500 each and the 16 player squad $5,000 each after they beat Niger 3–1 in a qualifier
Asked what he does at the press briefing, where he displayed the dollars, “I am a private citizen who does private business’’ said the former Uganda national team sprinter.

In May 2009, he went shopping for an A380 from the French aircraft maker Airbus to be used as a private jet
2010 October, while touring Nyayo Stadium in Nairobi Kenya, he informed the Daily Monitor of his offer to the Uganda Cranes of $650,000 should they qualify to the 2012 African Cup of Nations in Equatorial Guinea and Gabon. He has also thrown in an additional $50,000 if they won the Group J qualifier against Kenya’s Harambee Stars on 9 October 2010 in Nairobi, Kenya. The $650,000 was broken down as follows: 18 Players – $30,000 each, Coach – $60,000, Assistant Coach(es) – $25,000, Goalkeeping Coach – $25,000.
Controversies
2010, the Uganda police issued a warrant of arrest for Ezra, following his failure to clear multiple debts and allegedly issuing two bad cheques worth Ugx. 2 billion.
According to Ugandan police, Ezra issued false cheques to one Frank Katusiime and Dr Charles Mushabe, and failed to pay Uganda Revenue Authority more than Ugx. 1.2 billion in taxes.


In 2011 Ezra was arrested in Nairobi, Kenya and charged with drawing a bad cheque worth $200,000 (Ugx. 480m) to a Kenyan company, SMR Ltd, in 2009 with fraudulent intentions.
He allegedly drew the cheque on October 20, 2009 at Ecobank Towers on Muindi Mbingu Street in Nairobi, knowing that his account had insufficient funds.

Ezra allegedly disappeared after drawing the cheque, which prompted the company to drag him to court.
In February 2011, Michael Ezra was arrested by the Kenyan police. It was said Ezra had not honored court summons to defend himself against allegations that he issued a cheque worth $200,000, which was dishonored, to a Kenyan company
In July 2013, he was acquitted on charges of issuing bounced cheques

also read; Where do they get money?- I have worked for 50years, I don’t own Kampala-Wavamunno