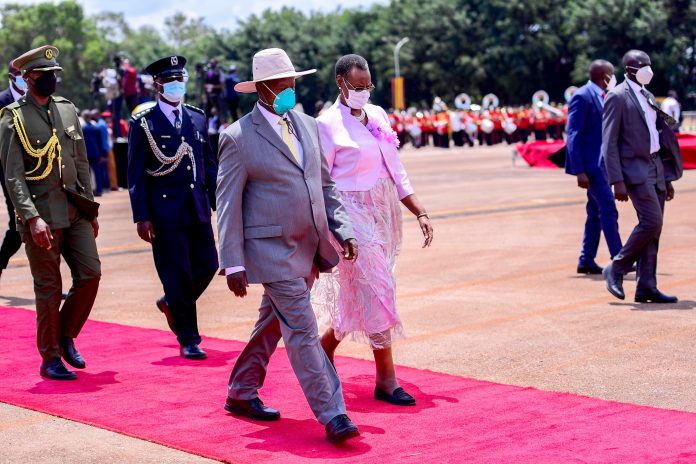 In these past two years -2020 and 2021- the new Uganda, has shown that it can stand on its feet and defeat any challenge.

In these two years, as many of you know, we dealt successfully with problems of: Locusts’ invasion; the rising levels of the waters of the Lakes (the floods); the land-slides; the floating island that were threatening hydro dams; and the corona pandemic ─where we minimized the deaths, recording a total of 3,150 deaths (as of 5th October, 2021).


All those challenges notwithstanding and inspite of the indiscipline of some actors, we successfully held
the 2021 General Elections for President, Parliament and Local Governments, on time.

Additionally, even our economy managed some growth in both the financial years 2020-2021 and the present financial year of 2021-2022.In the former, we managed a growth rate of 3.4% and in the current one, it is estimated that we shall achieve a rate of growth of 3.8%, the Covid19 related shutdowns notwithstanding.


All these achievements, are inspite of the corruption of some public officials, including some of the political actors.

I congratulate the whistle-blowers who, patriotically, expose these criminals, parasites and traitors to their own people.

I, therefore, congratulate the people of Uganda, the people of Africa and our partners in the World, because these achievements are not by our efforts alone.

However, we could have achieved more if it was not for the parasites that want to harvest where they have not sown (bamulya-byengedde).

It is very important for the NRM to continue to crystalize this focus on the Wealth creators – farmers, industrialists, crucial service providers (e.g. medical) and ICT.

Those who seek power and influence -Kings, Priests and Politicians etc. should have the sensitivity to ensure that their activities should never interfere with the work of the Wealth creators.

There was rinderpest in 1893 where a lot of cattle died in the Ankole-Kigyezi area and may be in other parts of the World. My great grandfather,Kashaanku, managed to save 7 cows, on account of their strong immunity. By the time he died around 1915, those cattle had multiplied.

It is us (the crop-farmers, the cattle-keepers, the fishermen, the manufacturers, the service providers, the artisans etc.), that feed the country and provide the other goods needed, that earn foreign Exchange for the Country, that create jobs, that pay taxes etc.

The attitudes of the Wealth creators are, actually, captured in the four NRM Principles: Patriotism, Pan-Africanism, Social-economic transformation and Democracy. Genuine wealth creators, cannot believe in sectarianism because their economic activities will have exposed them to the importance of the market of a united Uganda.

Here, in Kampala, I have two testimonies ─ that of James Mulwana and that of Burahimu Kibirige-both the late.

Neither of them was in politics. However, Mulwana was always fundraising for the NRM because he well understood that it is only that force, that could guarantee peace in Uganda and render her safe for business.

It also had private-sector friendly policies, like the ban we imposed on the export of used batteries, which was what Mulwana asked me to do for his Company, so that he gets batteries to recycle.

One time, I had gone to Hotel Africana for a meeting.

Burahimu Kibirige was worried. When I inquired from him what the problem was, he told me. The problem was, that the Basongora herdsmen in Kasese, had poisoned and killed lions in Queen Elizabeth National Park in revenge for Lions eating their Cattle. Kibirige was worried that, that act, would damage tourism. As you know, he built a hotel in Moroto, Karamoja. His concerns were national and his investments were national and, I hear, even Pan-Africanist.

He understood the usefulness of Uganda and Africa. As we go on, the difference between Wealth creator sand parasites will become clearer. The ranks of the Wealth-creators are going to be swelled by the Parish Development Model and the Emyooga Programmes.

These plans are aimed at converting the remaining 39% of the homesteads from subsistence farming, to commercial farming and other money generating enterprises, with ─ proper enterprise selection.

They all must join the ranks of wealth-creators. It will improve our politics, incomes for homesteads, purchasing power for buying products of goods or services produced by our factories, create a wider tax base, creating more jobs for the youth and being able to support the places of Worship and political actors of our choice.

In conclusion, I seem to detect a linkage between Wealth-creation with Patriotism and Pan-Africanism and idleness with Parasitism, working for foreign interests and anarchism. Maotse Tung, had detected something similar in China; that is why he talked of the unity of the 4 social-classes, including the National Bourgeoisie and isolating the compradorbourgeoisie (those whose economic interests were in service of foreign interests).


I think the four positive classes in Maotse Tung’s strategy were: the National bourgeoisie, the Workers (the Proletariat), the Peasants and the Patriotic petty bourgeoisie (teachers, health workers etc.).

The Feudalists and the Comprador bourgeoisie, were the parasitic group. The wealth-creators support peace because they do not want their economic activities to be disturbed
and when they decide to fight, it is for a big reason-like when we decided to fight Idi Amin- because he had no capacity to understand Patriotism or Pan-Africanism which are crucial for our survival and prosperity.

In 1970, I decided to work with the UPC, although we did not fully agree on all issues. However, with UPC, there was some possibility to push for some wealth creation efforts, e.g. restructuring the ranches and also some Pan-Africanist efforts – e.g. the East African Federation.

To consolidate peace durably, expand and strengthen the ranks of wealth-creators. Right from the beginning, the NRM emphasized the point of “ Protecting life and property.’’ It was actually point No2. in the 10 points programme.


Principle No. 3 in the four principles of the NRM, is social – economic transformation. You cannot transform society, without wealth creation. The NRM returned the properties of the Indians because the country was using the entrepreneurship of these Indians to contribute to the transformation of our society. Let everybody embrace wealth creation and the principles and strategies that support it (Patriotism,Pan-Africanism, Social – economic transformation and Democracy) and avoid idleness, dependency and
parasitism.
I congratulate the OWC for, in the last 8 years, helping us to reduce subsistence actors from 68% of the households to39%, according to the latest UBOS survey.
Let us use the Parish Development Model or the Myooga programme to convert all these into operators in the money economy.


the NRM believes in reconciliation always. However, reconciliation must be around healthy principles that can create growth and transformation, not stagnation and sterility. Let us not repeat old mistakes. Africa has suffered enough. The future is bright if we act right. I congratulate everybody and wish you a prosperous 60th year of Uganda’s Independence.