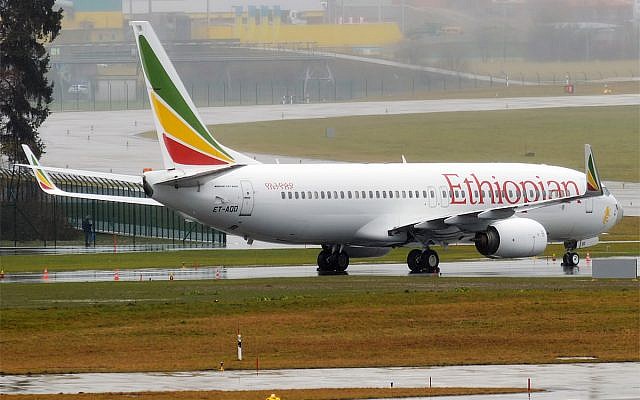 Ethiopian Airlines has grounded its Boeing Co 737 MAX 8 fleet until further notice, “Although we don’t yet know the cause of the crash, we had to decide to ground the particular fleet as extra safety precaution,” the airline said.


Ethiopian Airlines joins carriers in China and the Cayman Islands that have suspended the use of Boeing 737 Max 8 jets in the wake of a crash that killed all 157 people.
On Sunday, Ethiopian Airlines flight ET 302, on its way to Nairobi from Addis Ababa, crashed six minutes after take-off. It ploughed into a field near Tulu Fara village outside the town of Bishoftu, some 60km (40 miles) southeast of the Ethiopian capital.


The disaster was the second involving the new aircraft in the last four months.
October last year, a Lion Air plane crashed into the sea off the Indonesian capital of Jakarta, killing all 189 onboard.
“Following the tragic accident of ET 302 … Ethiopian Airlines has decided to ground all B-737-8 MAX fleet effective yesterday, March 10, until further notice,” the state-owned carrier said in a statement released on Twitter on Monday.

“Although we don’t yet know the cause of the accident, we have to decide to ground the particular fleet as an extra safety precaution,” said the airline, which is Africa’s largest.
The move came after China’s aviation authorities ordered the country’s airlines to ground their Boeing 737 Max 8 jets.


The cause of the crash is unknown, but Cayman Airlines also suspended operations of its two Boeing 737 Max 8 planes while investigations continued.
The civil aviation administration of China (CAAC) issued a notice on Monday at 9am local time ordering domestic airlines to suspend the commercial operation of the Boeing 737- Max 8 aircraft before 6pm.