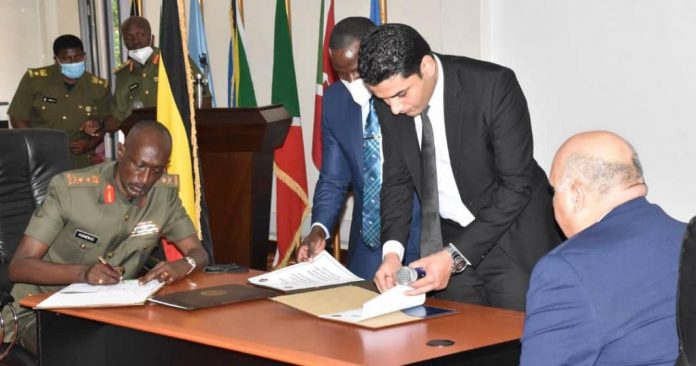 Egypt has attempted to enhance relations with the Nile Basin countries through concluding military deals, in a move to basically protect its water and national security, according to Egyptian experts.
Egypt has recently signed several agreements with Nile Basin countries, the last of which was last week with Kenya.
The North African country has signed similar deals with Uganda and Burundi in April and with Sudan in March.
Egypt and Sudan have finished a military drill on Tuesday. The military activities included naval, air, and land forces from both sides.


“Egyptian leadership attributes much interest to strengthen a permanent cooperation with the Nile Basin countries, especially in the military field for national security-related reasons,” Samir Farag, a military expert said.
“Since President Abdel Fattah al-Sisi assumed his office in 2014, he persisted in restoring good relations with the African countries, especially the Nile nations, after a stalemate in the last years of late President Hosni Mubarak,” Farag, also a former manager of the defense ministry’s morale department, told Xinhua.
He explained that Egypt has started with improving the cultural and economic cooperation with related countries, as well as establishing dams and later extending the military deals.

Currently, Egypt’s consortium of Arab Contractors and Al-Seweidy Electric companies are working on Tanzania’s 2.9-billion-U.S. dollar Julius Nyerere Dam and its hydroelectric power station.
“President al-Sisi personally has followed the project that will be the largest in Tanzania given its importance as a national project for the Tanzanian people,” Farag added.
The military expert added that Egypt is very keen on securing its water resources, highlighting “the military agreements with some Nile Basin countries are important to exchange the information.”
Abbas Sharqy, professor of water resources with Cairo University, agreed that Egypt has taken good measures to deepen ties with the Nile Basin countries especially Sudan, Uganda, and the Democratic Republic of the Congo, referring to the Egyptian delegation who traveled last week to purify the Congo River and make it valid for navigation.
He also highlighted the projects of establishing water stations in South Sudan and Uganda and others.


However, the water expert pointed out that more economic and investment projects should be taken into consideration, especially the projects that will bring direct benefits to the living conditions of the African people.
Meanwhile, Tariq Fahmy, professor of political science with Cairo University, explained that although the military agreements are meant to confront terrorism in Africa, they also carry Egyptian messages addressed to Ethiopia over its disputed giant Grand Renaissance Dam issue.
He sees that Egypt’s rapprochement with the Nile Basin region would not only preserve the water rights of Egypt but also achieve regional security and stability.


“Egypt has been pursuing a cooperation-led strategy with the Nile Basin countries, mainly the ‘ring countries’ around Ethiopia to protect its water, which helped in changing the policies of some African countries towards Egypt,” the political analyst said.
He emphasized that building more partnerships at the developmental level will take the joint relations to a better level of cooperation and will reduce factors of inciting tensions
Xinhua