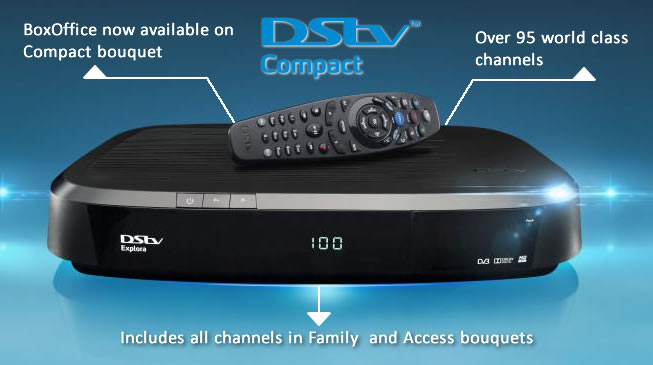 MultiChoice is spreading some love to its DStv Compact and Compact + customers by having an Open Window showcasing three top Premium channels. From 29 May to 23 June 2017, DStv Compact+ customers will be able to enjoy the laughs on Comedy Central (DStv channel 122), (which is only on Premium and Compact), and some interesting insights and History lessons on History (DStv Channel 186) and Discovery Channel (DStv Channel 121).
“These open windows give our customers a taste of some of the great channels available on our packages. It’s our way of saying thank you for your support – and highlighting some of the great content available on DStv Premium,” said Charles Hamya, MultiChoice Uganda General Manager.
Some of the highlights for DStv Compact customers


DStv Compact and Compact + customers are in for a treat as Comedy Central (DStv channel 122) will be showing Jerry Seinfeld and his motley crew of unhinged friends in Seinfeld, the hit 90’s TV sitcom which is currently running on the channel every weekday along other fan favourites like the second season of Broad City which airs Tuesday, 7 June.
Jeff Ross Presents Roast Battle premiers on Monday, 5 June inspired by the competitiveness of the stand-up circuit, Jeff Ross is back to preside over a series of one-on-one battles in an effort to determine a new roast champion.

History (DStv channel 186) will showcase 101 People Who Changed the 20th Century on Sunday, 4 June a factual documentary about the people who drove the changes in every aspect of life that made the Twentieth Century and set-up the Twenty-First?
A decade and a half since the close of the century we can take a considered look at the people most responsible for the events that changed their world and made ours. In this series we count down — from a hundred-and-one to number one — the names of those who, in the judgement of experts, including those who contribute to the series, most influentially shaped the century and our world.


Forged in Fire premiering on Monday, 5 June sees the best bladed weapon-makers, building everything from Viking battle-axes to Samurai swords, and even Indian claw daggers. There will be new weapons and contestants every week, and stunning tests of their creations.
The Greeks will premiere on Wednesday, 14 June. In this series, historians and archaeologists, actors and athletes, scientists and artists launch a groundbreaking exploration into the ancient Greeks’ journey — not just to better understand their past, but to discover how their legacy illuminates our present, and will shape our future.

Discovery Channel (DStv channel 121) which offers viewers the finest entertainment in the areas of history, nature, science and technology and human adventure will air Haunted UK which follows a group of brave individuals as they attempt to go off grid and avoid detection in this 24-hour surveillance society. Airing Monday, 5 June.


Cooper’s Treasure airing on Tuesday, 6 June is a real-life treasure hunt series which sees adventurer Darrell Miklos embark on a personal quest to fulfil his friend, astronaut Gordon Cooper’s, legacy of uncovering the hidden wealth he documented from space.
On Tuesday, 13 June viewers can watch Naked and Afraid where two complete strangers are tasked with surviving in one of the world’s most extreme weather environments with no food, no water and no clothes.
Schedules for these channels are available on DStv.com and will also be available on your TV Guide on your decoder from the start of the open window.