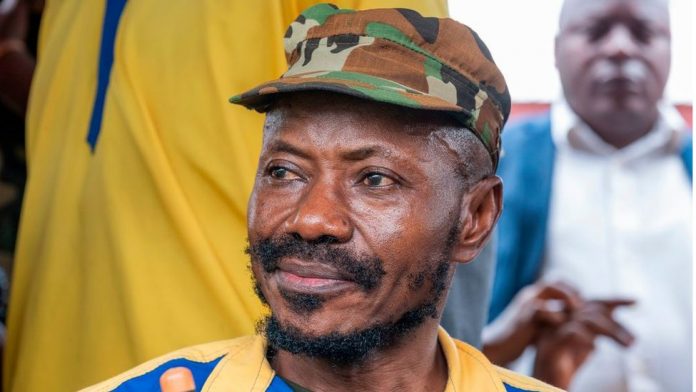 Democratic Republic of Congo Army official Col. Eddy Kapend who was pardoned over the assassination of ex-leader Laurent-Désiré Kabila, recently paid homage to father of current president- Felix Tshisekedi
Laurent Kabila was shot dead by a bodyguard in 2001. The bodyguard was himself shot dead immediately after.


A military trial that followed jailed dozens of soldiers, including Col Eddy Kapend, his personal aide.
Col Kapend was Laurent Kabila’s right-hand man. He was found guilty of having been the mastermind of the assassination, along with several other members of the late president’s security team, including the then intelligence chief Georges Leta. Both men denied any part in the plot.
“I say thank you for having given birth to a son who saved my life,” he wrote in condolence book.
He maintained his innocence throughout
January this year, Col Kapend, together with 21 others convicted over the 2001 assassination of former Democratic Republic of the Congo President Laurent-Desire Kabila was released from prison after receiving pardons from current leader Felix Tshisekedi.


Among those released on Friday from the Makala prison in the capital Kinshasa was the slain president’s former aide-de-camp Colonel Eddy Kapend, who has always denied any part in the plot to murder Kabila, who was the father of Joseph Kabila, Tshisekedi’s predecessor.
Kapend left the prison by a jeep under escort.
Laurent-Desire Kabila was gunned down in his office on January 16, 2001 by one of his bodyguards, who was then immediately killed.
The 22 convicted men were first handed death sentences, which were then commuted to jail terms by Tshisekedi last June.
He issued the pardon on December 31, several weeks after a coalition he formed with Kabila supporters ended.
The pardons are “for purely humanitarian reasons”, Deputy Justice Minister Bernard Takaishe told the 22 men at the ceremony, stressing that this did not amount to a “blank cheque”.

“You can’t just go out tomorrow and get yourself into the kind of situation which deprived you of your freedom,” he told them, adding that the pardon would not erase the men’s criminal record.
The measure was taken “quite simply because we want to put the country back on track, to bring some peace to the Congolese people”, he said.


There has been much speculation about who gave the orders for Kabila’s assassination, including suggestions that foreign powers were involved, as it came at a time when several neighbouring countries were involved in the conflict in DR Congo.