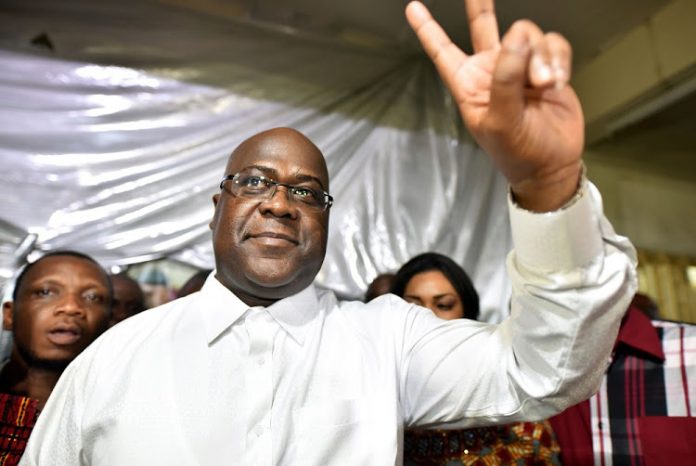 The influential Catholic Church which posted over 40,000 election observers in has questioned the official results of the Democratic Republic of Congo’s controversial December presidential elections.
The Catholic says the result given by the electoral commission does not correspond with its own tally,


The French and Belgian governments have also expressed doubts about the result.
On Thursday Opposition candidate Felix Tshisekedi was announced winner.
The church says its tally did not give victory to opposition leader Felix Tshisekedi. Three diplomats speaking anonymously to Reuters said the church tallies had showed Mr Fayulu winning.
The runner-up, opposition candidate Martin Fayulu, has accused Mr Tshisekedi of reaching a power-sharing deal with the ruling party.

Fayulu has described Tshisekedi’s ‘win’ as an “electoral coup”.
Mr Tshisekedi has denied cutting any deal.
French Foreign Minister Jean-Yves Le Drian also demanded clarity on results “which are the opposite to what we expected.”
In remarks made just hours after the provisional results were announced on Thursday, Foreign Minister Jean-Yves Le Drian said Tshisekedi’s opposition rival Fayulu, who was declared the runner up, should have been declared the winner.


“It really seems that the declared results … are not consistent with the true results,” he told France’s CNews channel. “On the face of it, Mr Fayulu was the leader coming out of these elections.”
And former colonial power Belgium said it would use its temporary seat on the U.N. Security Council to also seek clarification
Meanwhile, Joseph Kabila’s hand-picked candidate, Emmanuel Ramazani Shadary, who finished a distant third, conceded defeat.
“Of course we are not happy as our candidate lost, but the Congolese people have chosen,” Shadary spokesman Barnabe Kikaya Bin Karubi told Reuters.