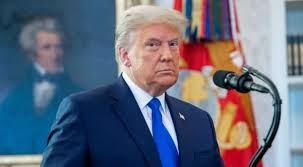 Less than six weeks after leaving office, former U.S. President Donald Trump on Sunday unleashed a torrent of attacks on his successor, contending President Joe Biden has had the “most disastrous first month in modern history” in the White House and strongly hinting he may try to reclaim the presidency in the 2024 election.
“In one short month, we’ve gone from America first to America last,” Trump told a cheering crowd of hundreds of conservative supporters crammed into a hotel ballroom in Orlando, Florida.
“I may even decide to run again,” Trump told the gathering at the Conservative Political Action Conference but ruled out forming a third party. He vowed to campaign for “strong, tough Republican leaders” to try to retake control of the House of Representatives and Senate in the 2022 congressional elections halfway through Biden’s four-year term and then the White House two years later.


In a 90-minute speech, he left no doubt that it could be him.
Trump assailed Biden’s dozens of executive orders, new directives that have overturned Trump’s tough immigration policies to thwart migrants at the U.S.-Mexican border and called for the U.S. to rejoin the World Health Organization and the international Paris climate change agreement.
Trump’s supporters booed at the mention of Biden rejoining the Paris accord.
He demanded that Biden reopen schools across the country, accusing him of fealty to teachers’ unions.
Trump attacked Biden’s proposed $1.9 trillion coronavirus relief package, saying a chunk of it would go to “bail out badly run Democrat cities.”
With millions of Americans now being vaccinated, Trump said, “Never let them forget this was our plan.”
The Biden White House dismissed Trump’s speech.
“While the GOP casts about for a path forward, President Biden is going to remain laser-focused on crushing the virus, re-opening schools, and getting Americans back to work,” White House spokesman Michael Gwin said after the speech.

Despite the cheers at the conservative gathering, Trump’s political role in Republican circles in the coming months remains uncertain. A base of Trump voters remains loyal for sure, but some Washington lawmakers are skeptical of his staying power and some appear to be planning their own 2024 presidential campaigns.
Trump is the only president in U.S. history to be twice impeached and twice acquitted and the first president in 90 years to lose political control of the White House and both chambers of Congress in a single term in office.
Conservatives at the three-day conference repeatedly cheered mention of his name, with many of them posing for pictures with a large golden caricature of his face that was sculpted in Mexico and was wheeled around the convention hall.


Asked whether Trump still controls the Republican Party, Senator Rick Scott of Florida told the “Fox News Sunday” show, “It’s the voters’ party.” But he said he believes Trump is “going to be helpful” in the immediate future.
“We’re on the right side of the issues,” Scott said of Republicans. “The Democrats are on the wrong side.”
But one Republican lawmaker who voted to convict Trump on the impeachment charge, Senator Bill Cassidy of Louisiana, told CNN that if Republicans reclaim the White House in four years, “it will be because we speak to the issues, not by putting one person (Trump) on a pedestal. CPAC is not the entirety of the Republican Party.”
“You’ve got to speak to voters who didn’t vote for us last time,” Cassidy said. “If we idolize one person, we will lose.”


“I don’t think he’ll be our nominee,” Cassidy said. “We need a person who lifts all boats.”