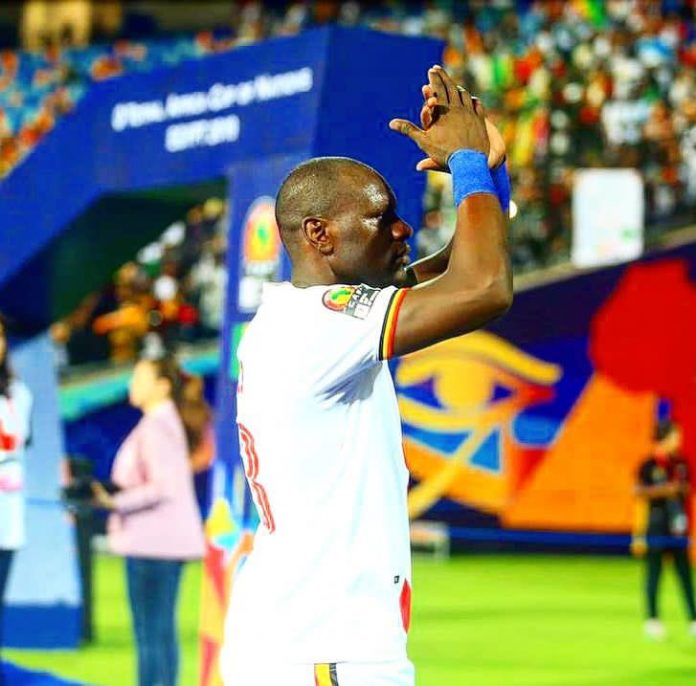 Uganda cranes captain Denis Onyango has retired from international football with immediate effect, he confirmed on Monday.
The 35-year-old shot-stopper played a pivotal role in helping them qualify for AFCON 2019 and is widely considered as one of the greatest players in the nation’s history.


Onyango issued his immediate retirement to the Federation of Uganda Football Association (FUFA) today which was accepted before he confirmed the news via social media.
“It is with a heavy heart that I am announcing my retirement from international football,” the Mamelodi Sundowns keeper said.

“After much consideration, my family, managers and I, decided it was in my best interest to hang my gloves on my beloved Cranes. Big thanks to every Ugandan over the years.”


Onyango amassed 80 caps for the East African nation since making his senior international debut against Cape Verde in June 2005.
Onyango’s retirement comes hours after Uganda Cranes midfielder who is also deputy team captain Hassan Wasswa announced his retirement from the national team.
The 33-year-old has confirmed his retirement in a statement obtained by Goal where he said it was a very big honour to represent the people of Uganda in the last 13 years.


“Today [Saturday] is a difficult day for me, but it is also a day of reflection and gratitude,” read part of the statement from Wasswa.
“Playing for Cranes has been a tremendous honour. During my 13 years as a Cranes player, I’ve always pursued success and winning football games, while preparing and training with the highest standards of competition, passion, and perseverance.
“It has been an honour to represent my family, my teammates, and the people of Uganda.
“With much sadness but without regret, I realise I am no longer able to adhere to the unwavering standard of excellence that professional football demands. I say this with a heavy heart.


“I am retiring from the national team. I love the game of football so much, and I know there is truly only one acceptable way to play. Knowing I can no longer compete at a level that I find acceptable, I have chosen to end my Cranes career.
“This decision is mine alone, and although I know this will not bring me happiness, it is the right and honourable action to take at this time in my life. I cherished every moment of my time with the national team, and it has been such a blessing to play the game for as long as I have played. I anxiously look forward to the next Cranes engagement, but this time with the sole focus of being a great fan.”


Wasswa continued: “My parents provided me with the perfect combination of love and discipline, and taught me what hard work and persistence truly are. All that I am, and everything I have done, is because of them. Every time I put on that Cranes uniform, I have always strived to honour them and the principles they stand for, and I can only hope that I haven’t let them down.
“The coaches I have learned from and played for as a Cranes player have been nothing short of outstanding. It was an absolute privilege to play for all of them, from coach Lazio Csaba in 2006 to coach Jonathan McKinstry during my final time.


“All of the assistant coaches and entire technical team were absolutely devoted to helping me perform to the best of my abilities. Thank you for your effort and dedication. It was an honour to play for you.
“To my exceptional teammates, former and current, I owe you everything. I look forward to addressing you formally and privately at a later time, but please know that I love and respect all of you, and not having the opportunity to be around you is what will hurt most of all.


“Forming friendships and unbreakable bonds of trust on the field is what makes football so special and so important to me. When reminiscing on my Cranes career, I won’t think about games won or lost, but rather, I know I will think about you and the time we shared together, the trust and love we had for each other, and the unwavering willingness we had to help each other succeed.
“Thank you from the bottom of my heart.