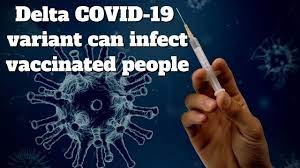 The variant, first discovered in India, has been identified in at least 85 countries and “is the most transmissible of the variants identified so far … and is spreading rapidly among unvaccinated populations,” World Health Organization Director General Tedros Adhanom Ghebreyesus said Friday
The variant is prompting alarm across Africa, where cases rose 25% in a week.
South Africa
Reuters quoted virologist Tulio de Oliveira, director of research at the University of KwaZulu-Natal in South Africa, as saying, “We are in the exponential phase of the pandemic with the numbers just growing very, very, extremely fast.”


The country’s second coronavirus wave was driven by the Beta variant first detected locally, but the Delta variant now looks to be leading new infections, specialists said.
“A new variant seems to be not only arising, but it seems to start dominating the infections in South Africa,” Professor Tulio de Oliveira at the University of KwaZulu-Natal told a news conference.
“It completely took over,” he said, adding that the Delta variant was more transmissible even than the Beta variant.
Health officials said the delta variant of the coronavirus has its own variant, called delta plus. It has emerged in almost a dozen countries, including India, the United States and the U.K. Authorities fear delta plus may be more contagious than the delta variant. Scientists are just beginning to study the new strain.

South Africa recorded more than 18,000 new infections on Friday, with 215 deaths.
Acting Health Minister Mmamoloko Kubayi-Ngubane told the news conference it was now likely that the peak of the third wave would surpass that of the second wave in January, when more than 21,000 new daily cases were recorded.
Sydney, Australia’s biggest city, on Saturday began a two-week lockdown because of the growing number of cases of COVID-19, the disease caused by the coronavirus.
The delta variant is to blame for the first lockdown in Sydney since December. Stay-at-home orders will also apply to other areas in New South Wales, Australia’s most populous state.


Russian surge
The delta variant is also behind a surge in cases in Russia. St. Petersburg, which next Friday will host the quarterfinal of the Euro 2020 football matches, on Saturday announced that there had been 107 COVID-19 deaths, a daily record for the city since the pandemic began.