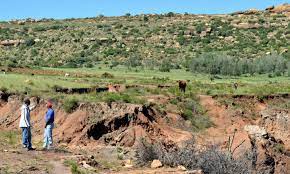 Farming in the Sahel region of Africa isn’t easy. It’s an area that suffers from degraded soils, erratic rainfall and is often subject to long periods of drought.
For that reason, farmland is often very hard, making it difficult for farmers to plant seeds and for crops to flourish. But new technology can reduce this burden for farmer and help restore land for future generations.
When Moctar Sacande, Coordinator of FAO’s Action Against Desertification programme, talks about restoring land in Africa, the passion in his voice is evident.


“Restoring degraded land back to productive good health is a huge opportunity for Africa. It brings big social and economic benefits to rural farming communities,” he says. “It’s a bulwark against climate change and it brings technology to enhance traditional knowledge.”
The Delfino plough
Luckily, there is a piece of technology that can aid farmers who are dealing with tough farming conditions and restore farmland: the Delfino plough.
FAO brought this state-of-the art heavy digger to the Sahel region as part of FAO’s Action Against Desertification (AAD) programme, using it to cut through impacted, bone-dry soil to a depth of more than half a metre. Four Delfinos have been introduced into four countries – Burkina Faso, Niger, Nigeria and Senegal – as part of FAO’s Great Green Wall initiative.
The Delfino creates large half-moon catchments ready for planting seeds and seedlings, boosting rainwater harvesting tenfold and making soil more permeable for planting than the traditional – and backbreaking – method of digging by hand.
The half-moon is a traditional Sahel planting method which creates contours to stop rainwater runoff, improving water infiltration and keeping the soil moist for longer. This creates favourable micro-climate conditions allowing seeds and seedlings to flourish.
The Delfino plough is also hugely efficient. One hundred farmers digging traditional half-moon irrigation ditches by hand can cover a hectare a day, but when the Delfino is hooked to a tractor, it can cover 15 to 20 hectares in a day.
Once an area is ploughed, the seeds of woody and herbaceous native species are then sown directly and inoculated seedlings planted. These species are very resilient and work well in degraded land, providing vegetation cover and improving the productivity of previously barren lands.


The importance of restored land

Restoring degraded land back to productive good health is a huge opportunity for Africa
By bringing degraded land back to life, farmers do not have to clear additional forest land to turn into cropland for Africa’s rising population and growing food demands.
In Burkina Faso, for example, a third of the landscape is degraded. This means that the over nine million hectares of land that was once used for agriculture cannot be used any more, and it is projected that degradation will continue to expand at 360 000 hectares per year. If the situation is not reversed, forests are at risk of being cleared to make way for productive agricultural land.
Africa is currently losing four million hectares of forest every year for this reason, yet has more than 700 million hectares of degraded land viable for restoration.
In Burkina Faso and Niger, the target number of hectares for immediate restoration has already been met and extended thanks to the Delfino plough. In Nigeria and Senegal it is working to scale up the restoration of degraded land.
“Local engagement is essential,” says Moctar. “The whole community is involved and has benefitted from fodder crops such as hay as high as their knees within just two years. They can feed their livestock and sell the surplus and move on to gathering non-timer products such as edible fruits, natural oils for soaps, wild honey and plants for traditional medicine.”

According to Nora Berrahmouni, who was FAO’s Senior Forestry Officer for the African Regional Office when the Delfino was deployed, the plough will also reduce the burden on women.
“The season for the very hard work of hand-digging the half-moon irrigation dams comes when the men of the community have had to move with the animals. So, the work falls on the women,” Nora says.
Because the Delfino plough significantly speeds up the ploughing process and reduces the physical labour needed, it gives women extra time to manage their multitude of other tasks.
The project also aims to boost women’s leadership and participation in local land restoration on a bigger scale, offering women leadership roles through the village committees that plan the work of restoring land. Under the AAD programme, each site selected for restoration is encouraged to set up a village committee to manage the resources, so as to take ownership right from the beginning.
“Many women are running the local village committees which organise these activities and they are telling us they feel more empowered and respected,” offers Moctar.
Respecting local knowledge and traditional skills is another key to success. Communities have long understood that half-moon dams are the best way of harvesting rainwater for the long dry season. The mighty Delfino is just making the job more efficient and less physically demanding.


“In the end the Delfino is just a plough. A very good and suitable plough, but a plough all the same,” says Moctar. “It is when we use it appropriately and in consultation and cooperation that we see such progress.”
And it is urgent that progress is made. Land loss is a driver of many other problems such as hunger, poverty, unemployment, forced migration, conflict and an increased risk of extreme weather events related to climate change. And as Moctar said, “That’s too many problems for us at FAO to allow vulnerable people to face.”