Home Health & Fitness “Covid-19 is killing many Tanzanians, but we are not allowed to release... 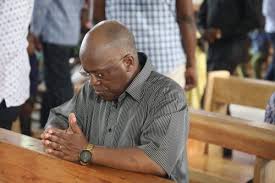 Tanzania has spent more than six months trying to convince the world it has been cured of the coronavirus through prayer, while refusing to take measures to curb its spread.
However, dissent is mounting, along with deaths attributed to “pneumonia”, with even a politician in semi-autonomous Zanzibar admitting he has the virus.
“Covid-19 is killing people and we see a lot of cases but we cannot talk about the disease,” said a doctor in a public hospital in Tanzania’s biggest city Dar es Salaam, who, like many asked not to be named for fear of reprisals.
President John Pombe Magufuli has continually played down the seriousness of the virus even as neighbouring countries shut borders and implemented curfews and lockdowns.


The country last gave case figures in April 2020, at the same time as Magufuli revealed he had secretly had a variety of items tested for the virus — of which a papaya, a quail and a goat apparently tested positive.
He alleged “sabotage” at the national laboratory, even though the Africa Centres for Disease Control and Prevention (Africa CDC) said Tanzania’s tests had been proven to be reliable.

By June, Magufuli claimed prayer had saved the country from Covid-19.
“That’s why we are all not wearing face masks here. You think we don’t fear dying? It’s because there is no Covid-19,” he said.
To crack down on information spreading about the virus, laws were passed to ban publication “on deadly or contagious diseases” without official permission.


‘Taking care of my life’

However, people can occasionally be spotted wearing masks and some speak openly about their fears.
“This thing is attacking and the government does not want to clearly come out and accept,” said Kuluthum Hussein, 28, who was wearing a mask at a bus stop.
“There are four people I know who died of what we are told is severe pneumonia and all passed on during a similar period. I’m taking care of my life.”
In January, Denmark’s Statens Serum Institut (SSI) which works on infectious diseases, confirmed two cases of the new South African variant that is thought to be more contagious, in travellers returning from Tanzania.

One woman in Dar es Salaam told AFP her cousin had died after a business trip to South Africa.
“Two weeks after returning from South Africa, he felt unwell and later died after experiencing difficulties in breathing. A doctor told us that he had coronavirus.”
Britain has banned all arrivals from Tanzania to stop the spread of the South Africa Covid-19 variant, while the United States warned in a travel advisory last week there were “very high levels” of Covid-19.
Breaking with the government’s code of silence, the Roman Catholic Church in Tanzania warned its followers to protect themselves.
“Our country is not an island. We have every reason to take precautions and pray to God so that we can move unscathed in this pandemic,” read the letter addressed to archbishops and retired bishops.
In semi-autonomous Zanzibar, vice president Seif Sharif Hamad confirmed he had been hospitalised with the virus.
A doctor working at the coronavirus testing centre in Zanzibar said that more than 80 cases had been recorded on the island from mid-December to early January.
“But we are not allowed to release the data,” said the doctor. “We keep it for future use.”
The rise in cases has led to mixed messaging from the government.

“No, just we want the people to take precautions because the number of people suffering breathing difficulties is increasing. We are not talking about Covid-19.”
Health Minister Dorothy Gwajima has said the country has no plan to import vaccines, which Magufuli has slammed as “dangerous”, contrary to guidelines by international health organisations.
Magufuli appeared last month to accept the virus may still be circulating.
‘God first’
He said some Tanzanians had travelled abroad to take the vaccine but “they ended up bringing us a strange coronavirus”.


“We need to put God first in fighting against this dangerous disease, but at the same time take health precaution measures to protect ourselves,” said Magufuli.
John Nkengasong, Africa CDC director, said last week that Tanzania’s was “a stance that I hope they will review quickly”.
“This is a dangerous virus, a virus that spreads very quickly, and a virus that knows no border. It doesn’t know whether you’re in Tanzania.”
AFP