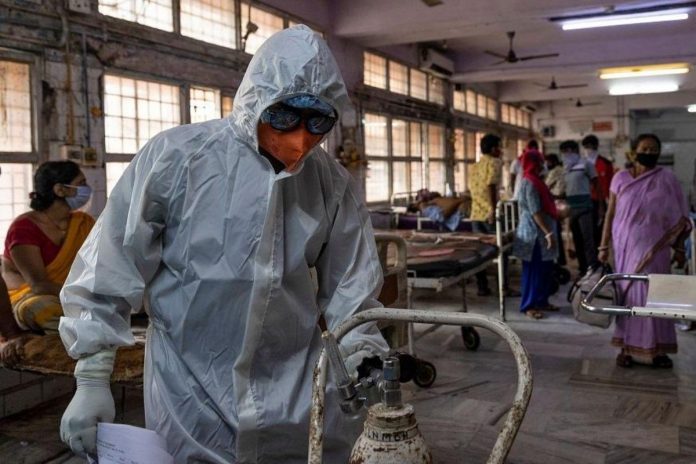 At least 12 patients, including a doctor, died when a prominent hospital ran out of oxygen on Saturday. Outside hospitals, families of patients who can’t find a bed are struggling to get hold of portable cylinders – sometimes standing in queues for up to 12 hours.
According to the BBC, Several big hospitals in Delhi are relying on daily oxygen supplies but they are not getting enough to keep some as backup in case of emergency.
One doctor described the situation as frightening, explaining: “Once you’ve used up your main tank, there is nothing to fall back on.”


And the oxygen crisis comes as coronavirus cases continue to surge.
Delhi alone reported more than 20,000 new infections and 407 deaths on Sunday.
‘My father was running out of oxygen’
Portable oxygen cylinders are the only way for patients in a serious condition to keep breathing at home when they can’t find a hospital bed – a major issue in Delhi.

Abhishek Sharma’s father’s oxygen levels started dropping on Saturday. He rushed to the market to get him a cylinder.
After going to more than a dozen shops, he found a small cylinder which was good enough to last just six hours. He later went out and paid $944 (£683) to buy a big cylinder but it was empty. He took it to several filling stations but only one was willing to help and the queue was very long.

Last week, he UK sent further vital oxygen equipment to India in support of the country’s fight against COVID-19.

The oxygen units are each capable of producing 500 litres of oxygen per minute, enough for 50 people to use at a time. Oxygen is one of the main needs of India’s healthcare system.


This follows the UK’s recent action to support India, with 495 oxygen concentrators and 200 ventilators sent from surplus stocks. The first batch of these medical supplies arrived in Delhi around 01:00 local time on Tuesday 27 April, with the rest due to arrive in Delhi by Friday. The equipment will all then be transferred to Indian hospitals.