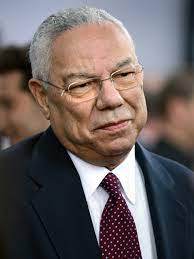 General Colin Powell, the first Black U.S. secretary of state and a former chairman of the military’s Joint Chiefs of Staff, died Monday from complications of COVID-19.
He was 84.

His family announced his death in a Facebook posting, saying, “We have lost a remarkable and loving husband, father, grandfather and a great American.”

The family said Powell was fully vaccinated against the virus. They thanked the medical staff at Walter Reed National Medical Center outside Washington “for their caring treatment” during his final days.

Powell had multiple myeloma, a white blood cell cancer that suppresses the body’s immune response, U.S. news outlets reported. Even if fully vaccinated against COVID-19, the disease caused by the coronavirus, immunocompromised people are at greater risk.


Powell was the country’s top diplomat from 2001 to 2005 during the first term of Republican President George W. Bush’s administration.
In a tribute, Bush said he and former first lady Laura Bush were “deeply saddened” by Powell’s death.
“He was a great public servant, starting with his time as a soldier during Vietnam,” Bush said. “Many presidents relied on General Powell’s counsel and experience. He was such a favorite of presidents that he earned the Presidential Medal of Freedom — twice. He was highly respected at home and abroad.”

President Joe Biden called Powell “a patriot of unmatched honor and dignity.”
“Colin embodied the highest ideals of both warrior and diplomat,” Biden said. “He was committed to our nation’s strength and security above all. Having fought in wars, he understood better than anyone that military might alone was not enough to maintain our peace and prosperity.”
U.S. Defense Secretary Lloyd Austin said on Twitter, “It will be impossible to replace Gen. Colin Powell. He was a tremendous personal friend and mentor to me, and there’s a hole in my heart right now as I think about his loss.”
Powell, a four-star Army general and 35-year veteran, was the Pentagon’s military leader, chairman of the Joint Chiefs of Staff from 1989 to 1993 under Bush’s father, President George H.W. Bush, and for months under his successor, Democratic President Bill Clinton. Prior to that, he was the U.S. national security adviser under President Ronald Reagan from 1987 to 1989.


Powell was viewed in U.S. political circles as a moderate Republican and pragmatist. He considered running for president in 1996 against Clinton but decided not to, as his wife, Alma, voiced fears for his safety.
In 2008, he broke ranks with the Republican Party and endorsed the presidential candidacy of Democrat Barack Obama, who went on to become the first African American elected to the White House.
Military campaigns

Powell played a key role two decades ago in some of the country’s major military conflicts.

In 1991, when he was the top military officer, the elder Bush ordered U.S. combat troops to expel Iraqi forces from neighboring Kuwait, a short conflict that for a time sent Bush’s political popularity soaring in the country.


But in 2003, while he was the country’s top diplomat, Powell also played a key role in leading the U.S. into its ill-fated invasion of Iraq on the erroneous intelligence that Iraqi strongman Saddam Hussein had amassed weapons of mass destruction — stockpiles of chemical and biological weapons — that posed an imminent threat to world peace.
On February 5, 2003, Powell addressed the U.N. Security Council, advancing the case for war sought by President George W. Bush and key officials in his administration, including Vice President Dick Cheney.
Powell asserted that “there can be no doubt that Saddam Hussein has biological weapons and the capability to rapidly produce more, many more.”


By September 2005, however, he acknowledged that his U.N. speech was rife with inaccuracies based on faulty U.S. intelligence.
In a television interview, he described his support for the U.S. invasion of Iraq as a “blot” on his record. The U.S. did not discover weapons of mass destruction in Iraq.


“It will always be a part of my record,” Powell said. “It was painful. It’s painful now.”
VOA