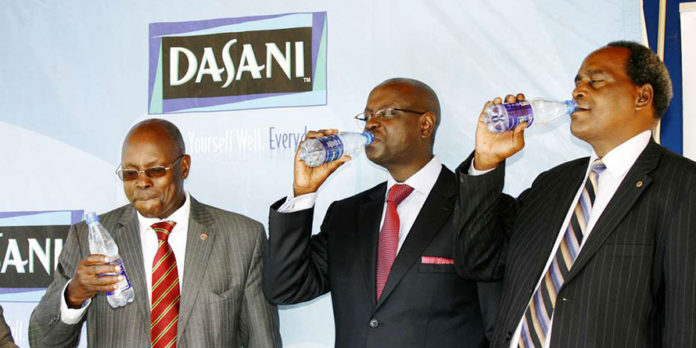 Coca-Cola Company is now Kenya’s biggest water bottling company following merger of its local operations with SABMiller, fresh market data has showed.
SABMiller in 2014 agreed to team up with The Coca-Cola Company and the Gutsche Family Investments (GFI) to create Africa’s biggest soft-drinks company, Coca-Cola Beverages Africa (CCBA).
Under the deal, The Coca-Cola Company also took over Crown Beverages, SABMiller’s local subsidiary which owns the Keringet brand of bottled water.
Competition Authority of Kenya (CAK) data shows that prior to the merger, Coca-Cola had 9.01 per cent market share, the third-highest in Kenya, while Crown Beverages, was leading with 13.87 per cent market share.
Combined, the Keringet and Dasani brands now account for the largest market share.

The competition watchdog, which approved the transactions last year, did not see this merger as negative for competition in the sub-sector.
“The merged parties would have a combined market share of 22.88 per cent making them the top player in the market and as a result were unlikely to prevent or lessen competition in the relevant market for the bottled water as both brands were to be maintained,” says CAK in its 2015/16 annual report released last week.
Excel, with its Quencher brand of water, has the second-largest market share, 10.5 per cent, while Highlands and Acquamist have 5.68 per cent and 5.58 market share respectively.


CAK approved the deal on condition that Coca-Cola would continue producing Keringet branded water for at least three years and that the 186 employees at the Keringet plant in Molo Would be retained for at least two years. After this, the company is supposed to retain at least 140 plant employees.
The soft drinks market in Kenya has been growing more competitive in recent years with the entry of new players. Bidco is constructing a Sh4 billion beverage plant in Thika.
In 2015 Kevian Kenya, the manufacturers of Afia Juices, acquired a water bottling plant from Kenblest.
Source: BusinessDaily