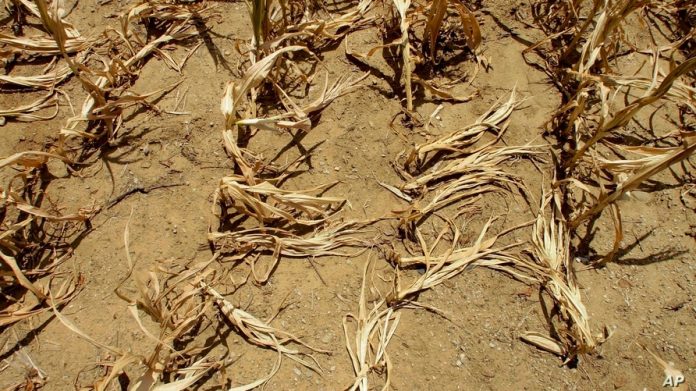 The United Nations warns accelerating climate change is causing a dramatic intensification of global drought disasters, which are threatening agricultural production, the world’s safe water supply and other essential aspects of human development.
The U.N. Office for Disaster Risk Reduction has launched a “Special Report on Drought 2021.”
U.N. researchers say drought has affected more people around the world in the past four decades than any other natural disaster. The U.N. report warns the impact of the climate-driven drought emergency on the lives and livelihoods of people across the planet will worsen in the coming years.


The U.N. Secretary-General’s Special Representative for Disaster Risk Reduction Mami Mizutori says drought has directly affected 1.5 billion people so far this century. She says most of the world will be living with water stress in the next few years as drought disasters grow.
She says drought is a major factor in land degradation and is responsible for declining yields of major crops. She adds shifting rainfall patterns and variability pose a risk to the 70 percent of global agriculture that is rainfall-dependent.
“A warming planet threatens to multiply the number of people without access to safe water and sanitation, thereby seriously increasing the spread of diseases, the risk of displacement and the potential even for conflict over scarce water resources,” Mizutori said.

While droughts always have been part of the human experience, the damage and costs resulting from them are seriously underestimated. The report estimates the global economic costs arising from drought from 1998 to 2017 of at least $124 billion.
The World Health Organization considers drought to be the most serious hazard to livestock and crops in nearly every part of the world. It says water scarcity impacts 40 percent of the world’s population. WHO projects as many as 700 million people are at risk of being displaced by 2030 because of drought.
Leading co-author of the report Roger Pulwarty agrees the data contained within the report is grim but does not see an apocalyptic picture ahead.


“I do not think that there is in fact this issue surrounding the collapse of civilizations…We are not seeing truly an increase in the frequency of drought,” Pulwarty said. “But we are seeing that where they occur in the different regions in which they do exist, an increase in intensification when they occur and the rapid onset of drought.”
Over the millennia, Pulwarty notes people have found ways to adapt to risks from drought and other natural disasters. He says lessons learned from over 20 cases around the world – including the Horn of Africa and the Euphrates and Tigris River system in Western Asia – have been incorporated in the report.


However, he says tried and true drought management measures taken in the past must be adapted to meet the challenges of today’s changing nature of drought risk.
VOA