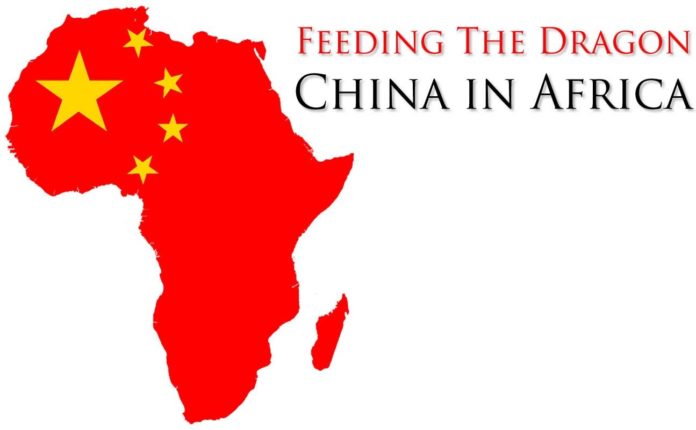 China’s growing influence in Africa is triggering something close to panic on the part of Trump administration officials, members of Congress and sections of the US media.
They depict China as a “predatory lender” that is “weaponising capital” in order to practice “a new form of colonialism” in Africa.


But such accusations have little factual basis, according to US-based independent policy analysts.
TRUMP
They suggest that the rhetoric being employed against China may be partly intended to divert attention from President Donald Trump’s dismissive attitude toward a continent he has reportedly described as a collection of “sh**hole countries.”
Mr Trump’s Africa diplomacy team remains riddled with vacancies. And the president appeared to underscore his disregard for African sensibilities by recalling Rex Tillerson from a long-awaited visit to Africa and then sacking him as secretary of state days after Mr Tillerson had sought to assure his hosts that the Trump administration does respect Africa.

But prior to and during his abbreviated safari, Mr Tillerson had framed the US approach toward Africa as consisting mainly of concerns about China and insurgencies. He offered no new programme initiatives while seeking to downplay the potential impact of Africa-related spending cuts proposed by Mr Trump.
In a speech the day of his departure for Africa, Mr Tillerson warned that China’s Africa policy “encourages dependency using opaque contracts, predatory loan practices, and corrupt deals that mire nations in debt and undercut their sovereignty, denying them their long-term, self-sustaining growth.”


“Its approach has led to mounting debt and few, if any, jobs in most countries,” Mr Tillerson charged. “When coupled with the political and fiscal pressure, this endangers Africa’s natural resources and its long-term economic political stability.”
CHINA FACTOR
China’s growing financial stake in Africa may come to threaten US interests, Mr Tillerson implied. And he argued that Beijing’s refusal to condition its loans on adherence to human-rights and anti-corruption standards is imperilling Africa’s democratic development.


US-based policy analysts critical of the Trump administration’s record on Africa do affirm the contention that China is uninterested in promoting respect for human rights in Africa.
“Of course, Chinese government and firms have low if not zero interest in democratisation in Africa,” says Youyi Zhang, a research fellow at Boston University’s Global Development Policy Centre. He adds, however, that “there are many domestic factors that contribute to lack of democracy and rule of law in Africa, more fundamental than the China factor.”
Deborah Brautigam, director of the China Africa Research Initiative at Johns Hopkins University’s School of Advanced International Studies, adds, “It is worth pointing out, as we can see with oil investments from companies like Exxon and Shell, respect for human rights has not been a cornerstone of American or Western corporate investment in the continent.


OBAMA YEARS
While the Trump administration may be exaggerating and misportraying aspects of China’s role in Africa, there is no doubt that Chinese involvement has deepened considerably in recent years. And China’s rise in Africa has been accentuated by a decline in US involvement that began during the Obama years.
China surpassed the US as Africa’s largest trading partner in 2009.
US foreign direct investment in the continent dropped 5.2 percent in 2016, while China’s investments in projects in Africa grew by more than 100 percent that same year, according to a report by the Ernst and Young global consulting firm.


In what could be construed as an admission signalling the passing of an old order, US Africa Command chief Thomas Waldhauser recently told Congress that the US will “never outspend the Chinese.” Gen Waldhauser was referring explicitly to Djibouti but his concession might accurately be applied to other African countries as well.
KENYA’S SGR
China’s expanding financial role in Africa includes $35 billion spent on power generation and transmission projects, along with $30 billion for transportation infrastructure, including the underwriting of Kenya’s standard gauge railway linking Mombasa and Nairobi.


The US has meanwhile experienced delays in implementing President Obama’s Power Africa initiative that aims to leverage a comparatively small sum of $7 billion in private investments for electricity generation.
Mr Tillerson noted prior to his sacking that the US typically does not build infrastructure in Africa. It focuses instead on development aid, health programmes and humanitarian relief, along with counter-terrorism efforts.
“The US and China have traditionally funded complementary sectors in Africa,” Prof Brautigam observes. And US officials do occasionally acknowledge that China’s role in Africa has positive elements that are facilitating the development of poor countries.


DEBT BURDEN
China’s investments take the form of loans, not grants — leading to accusations that it is reversing progress made during the past two decades in easing Africa’s debt burden.
But most Chinese lending in Africa comes on favourable terms for borrowers, Prof Brautigam notes.
Predatory lenders, by contrast, “use deception and fraud to entice borrowers to take out expensive loans they don’t really need and can’t afford,” she recently wrote in a commentary she co-authored with Kevin Gallagher, head of Boston University’s Global Development Policy Centre.


The writers pointed out that China’s investments in power plants and transportation are both needed and welcomed.
Prof Brautigam has also characterised as a “sticky myth” the contention that China’s heavy spending in Africa produces few jobs for Africans.
In 2016, Ernst and Young reported, Chinese investments produced “more than three times the number of jobs created by the next biggest investor, i.e. the United States.”
In comparison to the overall US involvement in Africa, “China is catching up, but its role should not be exaggerated,” Mr Zhang suggests.


MILITARY
“For military and political involvement,” he adds, “China is not as deeply engaged as Western countries and former colonial powers. But the gap between Chinese and American influence in Africa is much smaller than a decade ago due to lack of effective Africa policy from the US side.”
China clearly does have military ambitions in Africa. They are demonstrated most visibly by its construction of a naval base in Djibouti—close by the only permanent US military base in Africa. “There will be more” such Chinese installations in Africa, Gen Waldhauser predicted in remarks to Congress on March 6.
China is also increasing its military exports to African countries, which rose 55 percent between the period 2008-2012 and 2013-2017, according to the Stockholm International Peace Research Institute. ““A total of 22 sub-Saharan African countries procured major arms from China in 2013–17, and China accounted for 27 percent of sub-Saharan African arms imports in that period,” Sipri reported.


PEACEKEEPING MISSIONS
About 2500 Chinese soldiers and police officers are currently deployed in Africa under the aegis of United Nations peacekeeping missions.
The US does not contribute any troops to UN operations in Africa, but it does have some 6500 soldiers stationed in various African countries, some of which host US drone bases and other military installations.
“So far China is not a fundamental threat, as its footprint is still not as deep as assumed,” Mr Zhang commented. “Plus, China and the US are not direct competitors on this continent: China is more interested in economic cooperation, while US focuses more on security and military issues. The more serious challenge is that US government has not had an effective Africa policy.”


In their March 15 commentary in The Hill, a publication focused on the US Congress, Prof Brautigam and Prof Gallagher called on Mr Trump “to put his money where his mouth is and offer a better alternative” than what China is providing in Africa. The US president could, for example, scale up the Power Africa programme while welcoming, rather than denigrating, China’s investment activities in Africa, the scholars wrote.
///Daily Nation