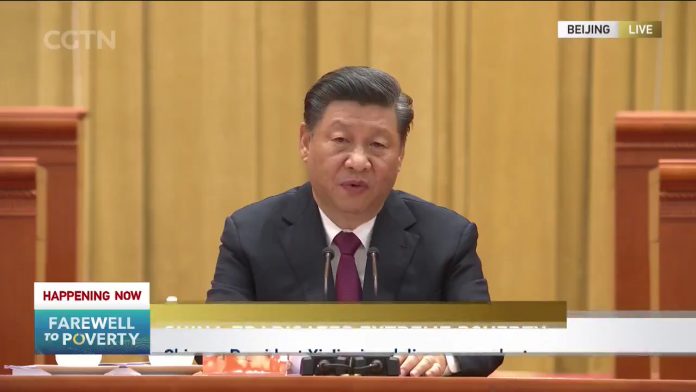 Chinese President Xi Jinping announced on Thursday that China has scored a “complete victory” in its fight against poverty.
Xi, also general secretary of the Communist Party of China Central Committee and chairman of the Central Military Commission, said absolute poverty has been eradicated in the world’s most populous country.
Xi made the announcement while addressing a grand gathering held in Beijing to mark the country’s accomplishments in poverty alleviation and honor its model poverty fighters.
Mr Xi handed out awards to individuals involved in the campaign Thursday. The event at the Great Hall of the People in Beijing was televised live to the nation of 1.4 billion people by state media.


Mr Xi has made fighting poverty one of his main goals since becoming leader of the ruling Communist Party in late 2012
According to Xinhua, Over the past eight years, the final 98.99 million impoverished rural residents living under the current poverty line have all been lifted out of poverty. All the 832 impoverished counties and 128,000 impoverished villages have been removed from the poverty list.
China last year raised its official poverty line to people earning 4,000 yuan (S$817) a year, up from 2,625 yuan in 2012, according to the official Xinhua News Agency.
While that is higher than the World Bank’s absolute poverty line, the Organisation for Economic Cooperation and Development (OECD) defines anyone with income less than half the median as being poor.

Using that standard, people in rural areas would need to earn above 7,500 yuan a year in China to escape poverty.
Since the launch of the reform and opening up in the late 1970s, 770 million impoverished rural residents have shaken off poverty when calculated in accordance with China’s current poverty line.
China has contributed more than 70 percent of global poverty reduction over the same period.
With such achievements, China has created another “miracle” that will “go down in history,” Xi said.