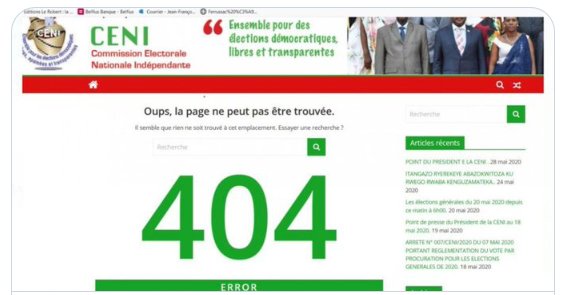 
CNL immediately cried foul. Party spokesman Terence Manirambona tells VOA’s Central Africa service that CNL has its own numbers to prove that Rwasa won.
“We are going to go through the appropriate channels to demand that the vote be recounted. We have a lot of facts that undeniably demonstrate that the results announced by CENI do not reflect the will of the people,” he said.
He said the party was “stunned” to hear what he says are false numbers and accuses the election commission of colluding with the ruling party to keep opposition election observers away from the polls.

CENI chair Pierre Claver Kazihise told media on Friday that the deleted data was “draft” and had been posted hurriedly by staff. Ruling party’s Gen Evariste Ndayishimiye got 68%, and 22% for challenger Agathon Rwasa
The development comes hours after the Conference of Catholic Bishops of Burundi said its observers stationed at polling centres across the country witnessed ballot box tampering, officials harassing and intimidating voters, and proxies registered “in place of dead people and refugees”.


The Catholic Church in Burundi says it observed “many irregularities” during last week’s election that call into question results that delivered victories to the ruling party and its presidential candidate.

In an audio statement late Tuesday, the head of the conference, Bishop Joachim Ntahondereye, said the ballot count was conducted in secret, and unauthorized people came and went from the tally room.


“We deplore the many irregularities regarding the freedom and transparency of the electoral process, as well as fairness in the treatment of certain candidates and voters,” said the bishop.
“Faced with these, and other irregularities, we wonder if this does not prejudice the (final) results yet to be proclaimed.”